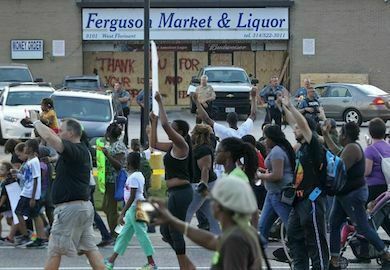 “I’m from Ferguson, Missouri, and you probably heard on the news all the rioting and all the crazy stuff. So that’s a distraction.”

“I was all in to it, reading and following up. A lot of the people involved were people I’ve seen, are in my high school, my friends, or family members. I went to that gas station many times to fill up and my house is literally two minutes from there, so it hits very near at home.”

“Our world in general is pretty f-ed up right now, but you have to be able to put that away and be focused thinking of the task at hand.”

“This week, my coaches are going to grab my phone, and I’m not allowed to watch videos on Ferguson because really, what can I do from China? The best thing I can do is go out there and put a whipping on Saturday, show them that someone from Ferguson is doing something positive, that he emerged from that environment he was born in, and he has made a good life for himself.”

“I think that’s the best thing I can do for the city right now.”

In a recent interview with Bloodyelbow.com’s Anton Tabuena, UFC welterweight Tyron Woodley discussed the riots in his hometown of Ferguson, Missouri.

Woodley fights Dong Hyun Kim this weekend for the UFC in China.