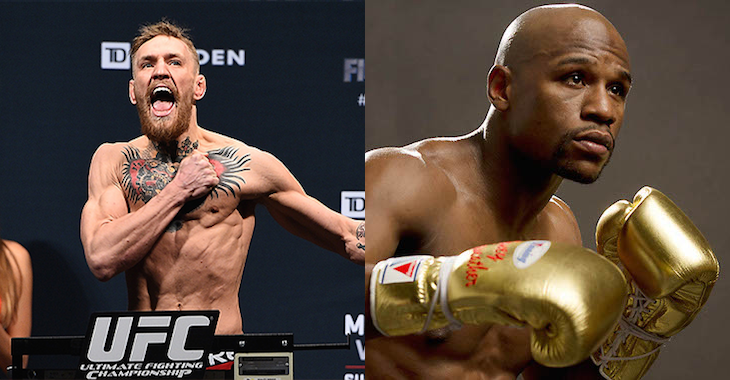 “I don’t look at a man who’s expert in one area as a specialist. I look at him as a rookie in ten other areas. If you can box, what happens if I grab hold of your legs? If you put me face-to-face with Floyd Mayweather—pound-for-pound boxing’s best—if I fought Floyd, I would kill him in less than thirty seconds. It would take me less than thirty seconds to wrap around him like a boa constrictor and strangle him.”

Conor McGregor is throwing heat in Floyd Mayweather’s direction just months before the biggest fights of their careers. Both men are set to have the biggest pay-per-views of the summer for their sport, but that doesn’t mean McGregor has to play nice with Mayweather.

If any other fighter was talking trash about boxer Floyd Mayweather leading up to their UFC championship bout, his team would likely be questioning his focus. However, this is the ‘Notorious’ one. It’s no holds barred for him!

In a recent interview with Esquire McGregor took a second to analyze Mayweather’s skillset. There is no doubt that Mayweather is one of the best boxers in the world, but how do you think he would fare in a fight with Conor McGregor?

McGregor will have to wait to find out as the two are currently tied up. McGregor will be meeting UFC Featherweight Champion Jose Aldo at UFC 189 in July and Floyd Mayweather will be looking to crush Manny Pacquiao in May.

BJPENN.COM IS YOUR HOME FOR MAYWEATHER/PACQUIAO COVERAGE IN MAY!