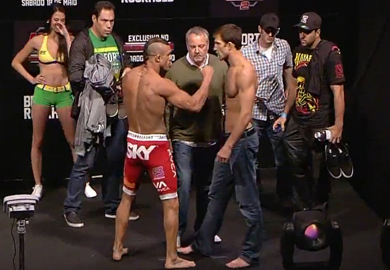 UFC on FX 8: Belfort vs. Rockhold takes place tonight from the Arena Jaragua in Jaragua do Sul, Santa Catarina, Brazil.

In the main event, MMA legend, Vitor Belfort will sqaure off with the last reigning Strikeforce middleweight champion Luke Rockhold, in a bout that has serious implications for the middleweight rankings.

The UFC on FX 8 main card kicks off at at 9 p.m. ET and 6 p.m. PT on FX. If you aren’t going to make the live broadcast of this event, you can follow along the night’s action below in BJPENN.COM’s Live play-by-play.

Round 1 – It doesn’t take long for the crowd to start a chant in favor of Zeferino. Zeferino connects with a right hook early on. About a minute passes where nothing significant is landed. Zeferino attempts to press the action and they exchange a series of strikes; nothing major. Zeferino ends up on top after Natal fails an attempt to pull guard. Their legs are now intertwined, it almost looks like a figure four leg lock. Zeferino is constantly working for leg and ankle locks but Natal keeps his composure and is never in any real danger. Another minute of slow action passes while their legs are intertwined and the referee finally stands them up with 20 seconds to go. Horn sounds. 10-9 Zeferino.

Round 2 – Zeferino lands a lunging left. Natal takes a solid body kick. Zeferino hits a nice takedown but Natal gets right back to his feet. Zeferino’s back is against the cage and Natal is throwing knees, looking to soften him up. Zeferino spins it around and separates; they are back in the middle of the octagon. Zeferino is not pressing the action like he was last round. Zeferino’s double leg takedown gets stuffed and Natal has a headlock, looking to transition to something more advantageous. No dice… they are both back on their feet. Natal hit a left hook that made Zeferino think twice about lunging in for another strike. Zeferino flops to his guard and Natal is standing over him. Eventually, he decides to dive into Zeferino’s guard. Natal is fighting smart on top, picking and choosing his strikes. If he finishes strong, this last 30 seconds will win him the round. The round ends with Natal elbowing Zeferino’s body in half guard. 10-9 Natal.

Round 3 – We get a nice show of sportsmanship at the beginning of the round with a hug. Natal hits a glancing leg kick. Natal lands a couple of nice shots while Zeferino is pinned against the cage. Zeferino is tired, but he musters up enough energy to connect with a right. Natal misses a sidekick and Zeferino takes advantage of it by going for a takedown. It backfires as Natal ends up on top. Natal is in Zeferino’s half guard and is grinding him down with elbows and punches to the body. Zeferino gets him back into his full guard but Natal gets right into side control seconds later. Natal is throwing elbows to the ribs of Zeferino and it doesn’t sound nice. Natal makes it to the back of Zeferino and transitions to full mount. Natal’s punches aren’t looking strong enough to finish the fight with 30 seconds left so it looks like this’ll go to decision. Horn sounds. 10-9 Natal.

Round 1 – Anjos opens up the bout with a leg kick that brings the crowd alive. Dunham blocks a head kick. Dunham eats a left hands. Anjos hits a nice leg kick/body punch combo. Anjos hits a solid overhand right. Anjos is striking intelligently and is landing the more significant strikes. Just as I type that, Anjos lands a nice body shot. As Anjos lands a head kick, Dunham successfully lands a takedown. In Anjos’ guard, Dunham seems to be content with just grinding Anjos down without many strikes. He pops up every now and then to strike with elbows and punches. Anjos is more active on the bottom, as a matter of fact. Not much action is happening and the referee stands them up. They exchange and then the horn sounds. Close round. 10-9 Anjos.

Round 2 – Both men are bouncing to start the round which tells us they will be keeping up the pace they did in the first. Anjos whiffs on a right hook and Dunham lands a takedown. It doesn’t lead to anything as Anjos is back on his feet seconds after. Anjos tries to hit a takedown of his own, but Dunham shuts him down. Anjos hits a right hook and the crowd comes to life for the first time since the middle of the first round. Dunham keeps hitting these glancing left straights but they never have enough power behind them to be anything significant. Anjos clinches and presses Dunham against the cage. Dunham turns the tables and separates. Anjos has a cut over his right eye; Florian thinks it came from an accidental headbutt. Anjos lands a leg kick but Dunham responds with a hook. Dunham goes for a knee with 20 seconds left but Anjos counters just in time and cracks him in the face! Dunham lands a takedown with 5 seconds left and the horn sounds. 10-9 Dunham.

Round 3 – Once again, they are both active at the start of the round. They’re both throwing combinations but besides the rare glancing punch, nothing is connecting. Anjos stuffs a double leg takedown and presses Dunham against the cage. Dunham spins it around on Anjos and separates. Dunham’s corner is calling for him to open up his opponent’s cut. Anjos lands a body kick that landed just below Dunham’s elbow. It sounded brutal. Anjos seems to be the more strategic striker here, landing with smart shots but Dunham has landed the stronger strikes. Dunham hits a right. Dunham’s attempt of a takedown is failed. Anjos eats a weak left cross. Dunham, once again, goes for a takedown but Anjos fights it off and is now pressed against the cage. Anjos has a Thai-Clinch and he hits some weak knees to the head of Dunham but Dunham landed some nice body shots of his own. Dunham connects with a series of two right straights and a hook. Solid round for Dunham, I believe it won him the round. 10-9 Dunham.

Round 1 – Camozzi goes for a right hook but Souza counters right away with a punch of his own. Souza lands a nice right hook. Souza goes for the clinch and tries to press Camozzi against the fence but Camozzi turns the tables and separates. Souza wobbles Camozzi and Souza lands a takedown and is on top. Camozzi is in trouble. Souza connects a brutal elbow to Camozzi’s skull. Souza’s strikes seem like they’re going to miss but they don’t; it’s odd. Souza stands up and Camozzi hits an upkick that leads to Souza going back down. Souza transitions right to side control. Camozzi tries to roll through and gives Souza his arm and almost finds himself in an omoplata, but escapes. Souza is in full mount, and sinks in a head/arm triangle and the deed is done. Camozzi is near passing out and the referee peels Souza off of him. Game over, man.

Ronaldo Souza defeated Chris Camozzi by way of submission (head-arm triangle) 3:37 into Round 1.

Round 1 – Rockhold slips on a highkick but gets right back up. Belfort throws a spinning back heel kick and whiffs. Nonetheless, it was impressive for a man his size. Rockhold shoots for a takedown but fails. Belfort checks a leg kick. Then, he blocks a head kick. Both men throw a combo and miss. Belfort blocks a spinning body kick. Rockhold lands a weak leg kick. BELFORT CRACKS ROCKHOLD WITH A SPINNING BACK KICK TO THE HEAD OF ROCKHOLD AND ROCKHOLD IS OUT. Belfort dives on Rockhold and punches his way to victory! The referee pulls Belfort off of Rockhold and we are done here.

Vitor Belfort defeated Luke Rockhold by way of knockout (Spinning back kick and strikes) 2:32 into Round 1.