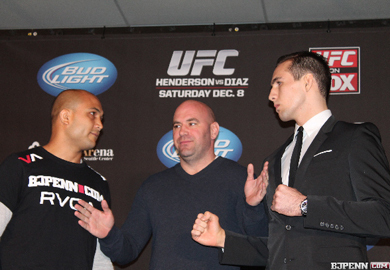 By Dr. Johnny Benjamin
UFC on Fox 5 is nearly here and to suggest that I’m more than just a bit excited would be a gross understatement! The card is stacked and I mean stacked from top to bottom and as an early Christmas or Chanukah gift it is FREE!

Many are eagerly anticipating what appears to be one helluva a scrap for all the marbles when Nate Diaz takes on the Champ Benson Henderson.
But honestly another fight may go down in history as a more significant occurrence or what my father would describe as a ‘watershed event’; Rory MacDonald vs. BJ Penn.
Let me explain.

Penn and MacDonald will forever be etched in UFC history as the first two fighters to have undergone true, comprehensive, random, unannounced, independent 8-week performance enhancing drug monitoring utilizing urine AND blood!! Did I leave out any adjectives?
This is HUGE!!

The testing is being performed by VADA which is recognized by many as the most aggressive and honest testing agency in the US and likely the world. VADA is testing for EPO, synthetic/exogenous testosterone using the highly effective CIR testing protocol, hGH and all of the usual offenders and masking agents. To put it bluntly, If you are cheating during this period you will be caught and if you have been cheating in the last few months prior to testing and thought you would just cycle off in time good luck with that!
I cannot say enough about the integrity, leadership and courage displayed by these two star athletes. They have made such an incredibly strong, bold and public statement on the largest stage in support of fighter safety and fairness!! They chose the most aggressive monitoring agency in the world and received no favors! They have further become heroes to many and role models for all.

I would be remiss in not tipping my hat to UFC president, Dana White. He like many openly feared could have very easily scuttled their desire to undergo VADA testing and compete in such an honorable fashion. He took a significant financial and public relations risk. The fight would have been cancelled by a single positive test and one or both of his highly marketable and lucrative athletes would have been suspended for many months. I just pray that this fight will help Dana White to slowly, incrementally become more comfortable with embracing the concept of truly independent, random and year-round PED monitoring in the UFC as a viable and necessary option.
Where I come from there is only one thing you say to human beings like BJ Penn, Rory MacDonald, Dana White and an organization like VADA.
RESPECT!!!

Dr. Johnny Benjamin is a respected orthopedic surgeon and a noted expert in combat sports. He serves on the Association of Boxing Commissions MMA Medical Advisory committee. Dr. Benjamin is also a sought-after commentator, journalist and medical commentator.