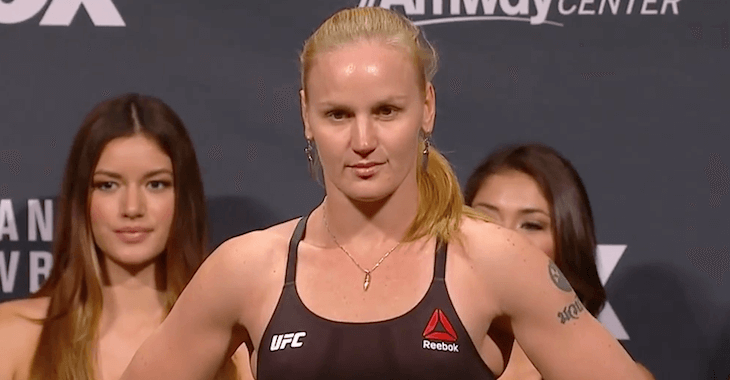 Kaufman starts off by throwing a combination. After trading some shots, Shevchenko scores a takedown and begins working from full guard. Kaufman is able to sweep Valentina and get back to her feet. Another successful throw from Shevchenko and she winds up in full mount. Kaufman battles hard and is able to get back to the fence and return to her feet. Shevchenko puts Kaufman up against the fence and begins landing strikes from the clinch to close out round one.

Round two begins and Shevchenko just misses with a spinning back fist attempt. Kaufman ties up Valentina and drives her up against the fence. Both women are landing good knees in the clinch. The fighters separate and Shevchenko lands a nice spinning back kick. Back to the clinch and Shevchenko is landing some good knees on Kaufman. Another nice trip scores for Shevchenko and she winds up in full guard. Kaufman is throwing some decent strikes from the bottom but she is clearly frustrated at this point. Kaufman returns to her feet with one minute left in round two. Sarah ties up Shevchenko and tries to work for a takedown but is unsuccessful as round two comes to a close.

Round three starts and Kaufman is finally able to get Shevchenko to the floor. Sarah is able to move to side control and begins landing strikes from the coveted position. Good elbows from Kaufman but she likely needs the finish to come away with a victory tonight in Orlando. Sarah is searching for an arm lock but Shevchenko is not having it. Under a minute to go and Sarah begins raining down elbows. She moves to full mount but Shevchenko is able to shake her off right before the horn sounds.