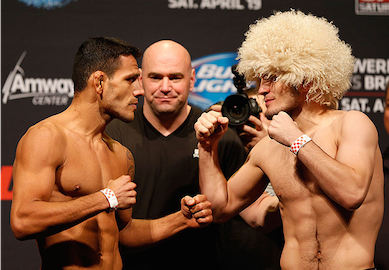 If you can’t make the preliminary card broadcasts or just missed a few bouts, follow along with us here as we break down every blow, every submission, and ever strike, in real-time, right here in this very thread.

Round 1 – May lands the first strike, with a leg kick. Lands another one. May throws a huge right hand and misses. Lewis shoots in and gets a takedown. Has May pinned against the cage, is in half guard. May is trying to push off the cage. May reverses Lewis and has him against the cage. Lewis is trying to stand up, gets to his feet. May has his back and throws him back down. May is in full mount. Lewis is holding him close to his body. May is landing good hard shots from the top, without posturing up. Lewis explodes and rolls, ends up on top position and starts landing huge shots to May’s head. May gets to his feet and has Lewis against the cage standing, tries to go for a takedown but Lewis reverses and continues to land huge punches to May’s head. May is hurt and the referee stops the fight.

Round 1 – Bektic comes in with a double jab. Both fighters feeling each other out. Bektic throws a combo but misses with the right hand. Both fighters punches are coming up short. Skelly lands a big jab. Skelly clinches  up. Bektic reverses position and has Skelly up against the cage. Bektic is throwing some short knees to Skelly’s legs. Fighters break apart. Bektic lands a big left hook. Skelly throws a huge overhand right but misses. Skelly tries to drop under punches to go for a takedown. He fails and Bektic ends up in Skelly’s guard. Bektic is landing good punches from in the guard. Bektic moves to half guard. Round ends with Bektic on top. 10-9 Bektic.

Round 2- Skelly is cut under right eye. Skelly’s punches are coming up short. Bektic is landing good combos. Bektic lands an uppercut. Then lands a body shot. Skelly pressures Bektic against the cage, looking for a takedown. Skelly lands some good punches in the clinch. Bektic reverses Skelly against the cage. Fighters separate. In the middle of an exchange Skelly cracks Bektic. Skelly rushes in. Has Bektic against the cage. Skelly lands a few knees and Bektic drops. The referee separates them. It appears that Skelly landed two illegal knees, because Bektic’s hand was touching the mat. Time out is called for Bektic to recover. A point was taken from Skelly. Fight continues. Skelly lands a knee in the clinch. Round ends. 9-9, due to the point deduction.

Round 3- Both fighters are landing jabs. Bektic is looking to counter. Bektic goes for a takedown, picks Skelly up and slams him down. Bektic is working form the guard. Moves to half guard. Skully uses the cage to push off and reverse position. Fighters scramble and Skelly ends up on Bektic’s back. Bektic goes out the back door and is again in Skelly’s half guard. Bektic lands a few short punches. Skelly gets back to his feet and the fighters separate. Skelly lands a huge right hand that appeared to hurt Bektic, who then goes for a takedown, Skelly rolls under and is going for a leg lock. Both fighters try to look for last second submissions.Round ends, 10-9 Bektic.

Round 1 – Ortiz is pressuring Borg right away. Has him against the cage. Borg pulls guard and looks for a guillotine. Ortiz takes it to the mat, Borg no longer has the choke. Borg gets a quick switch and is on top position. Ortiz’s back is against the cage. Ortiz landing some good body shots. Borg is holding onto the legs. Borg picks Ortiz up and slams him down. Borg jumps to the back of Ortiz. Ortiz goes out the backdoor. Now Ortiz is on top position. Has Borg’s neck. Borg gets up and has Ortiz against the cage, again picks him up and slams him. Borg goes to the back of Ortiz again. Ortiz reverses and is in Borg’s guard. Now is in half guard. In the last seconds fighters get to their feet and land a few hard punches. 10-9 Borg.

Round 2-  Borg with a good body kick. Borg almost counters with a big right hand. Ortiz gets Borg up against the cage. Borg reverses. Ortiz reverses. Ortiz is landing knees to the legs of Borg. Ortiz gets Borg down to the mat. Ortiz is in side control. Borg pulls a hip escape and moves Ortiz to guard. Borg gets up and moves to Ortiz’s back super fast. Ortiz is on his stomach with Borg on top. Borg has a body triangle locked up. Borg is attacking with the choke. Ortiz cant get Borg off. Ortiz stands up with Borg on his back. The fighters do down, Borg seems to have the choke locked up, Ortiz rolls and gets put but Borg stays on the back. The round ends, 10-9 Borg.

Round 1 – Both fighters feeling each other out. Mein lands a leg kick. Another kick from Mein. Perpetuo lands a leg kick of his own. Mein throws a head kick, it’s blocked. Mein gets a takedown. Is in Perpetuo’s guard. Mein is landing shots in the guard, while posturing up. Now is in full guard, now in half guard. Mein lands a good left hand. Pereptuo gets a sweep and both fighters are up. Mein lands a huge knee to the face of Perpetuo. Mein is bouncing around on his feet, very loose. Perpetuo having a hard time finding his range. Round ends, 10-9 Mein.

Round 2-  Mein with a good leg kick. Perpetuo still missing on his strikes. Misses another leg kick. Kick lands from Mein. Fighters seem content with standing and striking. Good left and right from Mein. Mein is coming in and striking and moving out before Perpetuo can hit him. Mein goes down for a takedown and gets it. Mein is in half guard. Perpetuo gets to his feet. A good left lands from Mein. Perpetuo swings a few big punches but misses. Bell rings and Perpetuo lands a punch. Seems frustrated. 10-9 Mein.

Round 3- Mein is landing the jab. Perpetuo looks much more aggressive. Mein with a left punch then leg kick. Double jab from Mein. Mein gets another takedown. Working from half guard. Perpetuo is going for a leglock. It looks tight. Mein seems calm. Perpetuo rolls but lets go of the leg and is now on top position. Perpetuo is cut. Mein gets to his feet. Perpetuo is baiting him in. Mein continues to use his foot work. Mein gets hit with a huge right hand. Mein shoots in. Perpetuo is trying to get a triangle, but the clock runs out. 10-9 Perpetuo.

Round 1 – Zachrich lands a leg kick. Body kick from Magalhaes. Magalhaes is attacking Zachrich. He is relentless with his strikes and throwing everything into them. He lands a body punch and a left hand to the head that hurts Zachrich. He pounds him until the referee steps in and stops the fight.

Round 1 – Payan with a good body shot. Lands a good left hook. White with a kick to the body. Payan catches kick and lands a good punch. Payan lands a right hand. White goes for a spinning back fist and misses but right away lands a big left hand that drops Payan. White lands several unanswered punches to the face of Payan. The referee stops the fight.

Round 1 – Leg kick from Healy. Healy comes forward with a right left combo. Madvidal is throwing front leg kicks. Healy goes for a body shot. Masvidal lands good body kick. Masdival lands good jab and hook, but Healy goes in and pins him against the cage. Masvidal is trying for a standing guillotine. Healy just ignores and goes for a takedown. Healy gets the takedown, but Masvidal gets to his feet. Healy still has him against the cage in the clinch. They separate. Blocked head kick from Masvidal. Masvidal goes for flying knee, but Healy goes for a takedown, Masvidal gets up and to his feet. Round ends, close one, 10-9 Healy.

Round 3- Masvidal lands a few good hooks but Healy gets him against the cage again. Masvidal spins him around and lands a good knee to the body before breaking away. Healy gets him on the cage, Masvidal spins it around. Healy reverses, then they break. In the center of the octagon Masvidal lands a good jab. Healy slams Masvidal in the center of the octagon. They scramble and Masvidal is on top. In half guard. Now in full guard. Healy gets himself on the cage and is looking to wall walk. He gets to his feet. Masvidal lifts the legs and gets the takedown. Masvidal is trying to take the back. They are both standing, Healy drops and rolls to get the reverse. Healy now has Masvidal against the cage. The round and fight end with the fighters separating from the clinch.  10-9 Masvidal.

Round 1 – Khabib misses first two punches. Anjos misses with a kick. Body kick from Anjos. Khabib gets the clinch and gets Anjos down to the mat. Anjos is trying to get up against the cage. He gets to his feet, still pinned on the cage. Khabib has his leg, takes Anjos down again. Anjos gets back up, still on the cage. Fighters break away. Body kick from Anjos. Jab from Anjos, Flying knee from Khabib. Gets another takedown. Anjos is working for a kimura but lets go. Anjos is on his feet, still clinched against the cage. Khabib lands a good uppercut before moving into the clinch. Fighters break away and are striking. Another body kick from Khabib. Anjos with a good body punch. Good right hook by Anjos, and good counter by Khabib. Round ends, 10-9 Khabib.

Round 2- Leg kick from Anjos. Front kick misses from Khabib. Body kick from Khabib. Fighters are doing a good job avoiding each others punches. Khabib gets a takedown. Anjos is trying to get a guillotine choke. He goes for it but Khabib gets out and is on top. Anjos trying to stand against the cage. Khabib is relentless in keeping him down. Khabib lands a few shots to the legs of Anjos. Anjos gets up briefly but Khabib takes him down again. He is in half guard. Now is in full guard. Khabib lands a big punch from the guard. Followed by a few more. Fighters get up with seconds left and exchange a few punches. 10-9 Khabib.

Round 3- Khabib goes up stairs for a head kick, but it’s blocked. Anjos with a good leg kick. Fighters clinch and Khabib has Anjos against the cage. Anjos breaks away. Body kick from Anjos, then he shoots in for a takedown. Instead Khabib gets a takedown. Is in half guard. Now in full guard. Anjos is going for a leg lock but Khabib gets out. Is back in full guard. Khabib is landing some punches. Anjos moves for an armbar and gets popped by Khabib, who goes right back to top position. Khabib stays on top for the rest of the round. 10-9 Khabib.