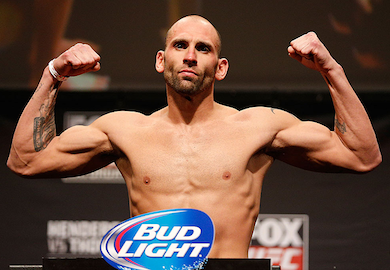 There was a lot of buzz surrounding Mike Rhodes as he took this fight on short notice. It would be his octagon debut and as the roommate of UFC fighters Anthony and Sergio Pettis, the hype created itself. Unfortunately for him, George Sullivan looked past the hype and picked himself up a victory.

George Sullivan showed heart and determination from the opening round as almost every right hand he threw could have been a knockout blow. Some of them glanced his opponent and some of them landed flush, and you have to give credit to Mike Rhodes for absorbing the blows without going down.

Mike Rhodes showed good control in the octagon and landed some crisp shots of his own. However, he simply could not string a combination together in this fight. You can credit to him gassing early on for taking the fight on short notice or the fact that he had Octagon Debut Jitters, the fact remains he didn’t land enough shots to pick up the victory.

George Sullivan picked up his first win inside the octagon with tonight’s decision.