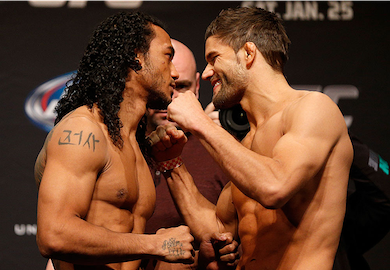 ‘UFC on FOX 10: Henderson vs. Thomson’ goes down tonight from the United Center in Chicago, Illinois.

Starting at approximately 1:30 p.m. PT, BJPENN.COM, will be providing fight fans with live up to the minute results and blow-for-blow/round-by-round coverage.

If you can’t make the live event, or can’t catch this preliminary event on FOX Sports 1, join us here for all the action.

Round 1 – Good leg kick from Stephens opens up the bout. Elkins eats a body kick as he lunges for a right hook. Elkins’ takedown is stuffed. Uppercut from Stephens as Elkins lands a left hook. Darren Elkins lands a right hook. Elkins throws a body kick but it’s caught and Stephens takes him down. Stephens is in Elkins’ open guard. He postures up and slams an elbow on Elkins’ face. Stephens stands back up as Elkins gets butterfly guard in. Elkins presses Stephens against the fence and he is looking to wear his opponent down. They make their way back to the middle of the octagon and Stephens lands a big uppercut. Right hand over the top from Stephens. Big body kick from Stephens. Horn sounds. 10-9 Stephens.

Round 2 – Elkins lands a good right hand but Stephens lands a powerful shot of his own! Elkins is on rubber legs but runs away from the action enough to recover. Elkins presses Stephens against the fence and tries to take him down in the clinch but Stephens escapes the hold and makes his way back to the center of the octagon. Elkins whiffs a left hook and Stephens counters with a right hook. Good kick from Stephens to the leg of Elkins. Elkins is dancing off the pain. Lunging teep kick from Elkins. Another strong right uppercut from Stephens. Head kick attempted by Darren Elkins but it’s blocked. Stephens’ body kick is blocked. Another nice uppercut from Stephens. Left jab nails Elkins in the face. 10-9 Stephens

Round 3 – Stephens takes Elkins down and Elkins is working on a guillotine attempt. Stephens escapes the hold and brings the action back to their feet right away. Stephens’ high kick is blocked and Elkins throws him off. Elkins goes for a takedown attempt as Stephens recovers his stance but is simply thrown off. Stephens whiffs a couple hooks. Elkins’ head kick attempt is blocked. Elkins lands a nice right hook. Stephens lands a good left hook that sends Elkins stumbling back. Stephens starts peddling back and tries to take the fight to the ground. Elkins is on top of Stephens and is working for a top-mount guillotine but he can’t execute it. 10-9 Stephens

Round 1 – Martins lands a kick to the liver of Cerrone. Outside leg kick from Cerrone. Right cross from Cerrone. Martins takes another outside leg kick. Cerrone’s head kick is blocked by Martins’ hand. Nice straight left and jab combination from Martins. Martins wraps his arms around the neck of Cerrone and pushes him away; they’re back standing in the middle of the octagon. Right cross from Cerrone misses. Cerrone ducks under an overextended punch and takes Martins down. Martins is almost in an armbar but he escapes and makes it back to his feet. In a close round, that will help Cerrone a lot. Right cross and a front kick to the body lands for Cerrone. Right head kick lands for Cerrone and Martins is out cold! The referee steps in and calls a stop to the fight.

Donald Cerrone def. Adriano Martins by way of KO (Head Kick) 4:40 of Round 1

Round 2 – We are seeing a slower pace from both fighters this round. Miocic is establishing his jab and he stuffs a takedown of Gonzaga’s. Gonzaga shoots for another takedown and takes a deep breath as it’s stuffed. Miocic is popping Gonzaga with standing straight elbows and jabs. Miocic is controlling where this fight is going now and pressing Gonzaga against the cage constantly. Gonzaga shoots for another takedown and it is stuffed. Miocic is truly taking control of this fight with his striking. Gonzaga’s mouth is wide open and the only shots he’s connecting with are wild ones that do not land on target. The horn sounds and Gonzaga needs to dig deep in round three. 10-9 Miocic

Round 3 – Outside leg kick from Gonzaga followed up by his right hand, but he is not following up with anything else. Miocic even stumbled back. Miocic is going back to his boxing. Miocic peppers him with a jab. Miocic is starting to mix it up as he lands a nice inside leg kick. Gonzaga shoots twice in a row for a takedown attempt but fails. Miocic lands about three jabs in a row. Miocic grabs a leg of Gonzaga and shoves him down to the ground. He stands over Gonzaga and is looking to dive into guard. Gonzaga makes his way back to his feet but slips back down. Miocic postures down, lands two punches, and pops back up. Bends down, lands two punches and gets back up. He dives into half guard and is landing shots. Big overhand punches to the head and body of Gonzaga. Miocic is landing shots to the body and head. Gonzaga makes his way back to his feet with ten seconds left. He lands a right hand but it won’t bring the miracle home. Horn sounds. 10-9 Miocic

Round 2 – Henderson lands a right punch and then a knee to the body. Thomson goes for a takedown but Henderson blocks it. Henderson presses Thomson against the cage and is looking for a takedown. They switch positions every couple moments but the referee separates them and they’re back in the middle of the cage. Henderson lands a short hook to the body and Thomson grabs a hold of Henderson. He takes him down. Thomson has the back of Henderson and locks in the body triangle again. Once again, he’s in backpack position and lets go of the body triangle. They’re back standing in the middle of the octagon. Henderson pushes forward and lands a big right hand body shot. Outside leg kick from Henderson. Right hook and a left hook from Henderson lands. Henderson’s kick is caught and blocked and he blocks a takedown despite missing one of his limbs. Insane. Horn sounds. 10-9 Henderson

Round 4 – Henderson lands a head kick, then switches levels and nails him with a head kick. Thomson lands a good takedown and he’s punching him with a broken hand. Thomson admitted after the first round that his hand was broken. Henderson tries to make his way back to his feet but Thomson makes it all the way over to the back of Henderson. Henderson switches it around and takes Thomson down. Thomson makes his way back to his feet and is pressed against the cage. Thomson pushes off and they’re back in the middle of the ring. Thomson lands a takedown and he has the back of Henderson. Henderson stands back up and Thomson is once again in the backpack rear naked choke position. This time, he decides to crank the hold but Henderson is saved by the bell. 10-9 Henderson

Round 5 – Henderson lands a hook to the body. He lunges in for a takedown, but it’s a fake; Henderson knees Thomson right in the solar plexus. Thomson is trying to set something up with leg kicks and body shots, but Henderson is keeping his distance. Henderson eats a leg kick. Thomson lands a punch with his broken hand. Henderson’s leg kick gets blocked. Leg kick lands for Henderson and he follows it with a jab/cross combination. Henderson lands a body kick but his leg is caught. Thomson pushes Henderson down and lands on top of him, but Henderson is back up again. Henderson has Thomson in an over/under clinch and lands a nice knee to the body. Thomson is pressed against the cage and takes a right knee to the head. Nice body punch from Henderson. Horn sounds. 10-9 Henderson