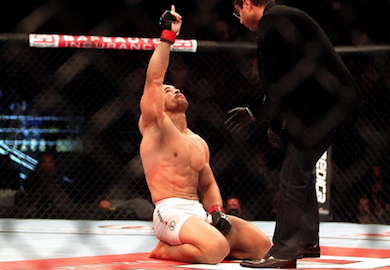 Rousimar Palhares has been making headlines this week for all the wrong reasons.

The former UFC middleweight turned welterweight made his 170 pound debut in Brazil on Wednesday, secured a submission in 31-seconds and lost his job the next day for cranking the hold long after his opponent, Mike Pierce, tapped out.

The UFC released an official statement explaining the termination of the Brazilian’s contract:

As announced by UFC president Dana White, the UFC organization has elected to terminate its contract with Rousimar Palhares based on repeated incidents of unsportsmanlike conduct violating the UFC Fighter Code of Conduct and his Promotional Agreement with Zuffa, LLC.

At ‘UFC Fight Night: Maia vs. Shields’ on Oct. 9, 2013, Palhares won his welterweight bout against Mike Pierce via heel hook submission in 31 seconds. Pierce appeared to tap several times physically and verbally and the ref intervened physically before Palhares let go. Despite being the only submission win on the card, Palhares was denied the Submission of the Night bonus. Managing Director of International Development Marshall Zelaznik announced at the post-fight press conference that the local commission would be investigating the length of time that Palhares held the submission.

The controversy is not Palhares’ first: In 2010, the New Jersey State Athletic Commission suspended Palhares for 90 days following his heel hook win over Tomasz Drwal at UFC 111 for not letting go after the referee stoppage.

In 2012, Palhares was again suspended for nine months after testing positive for elevated testosterone after UFC on FX 6.

Think this is fair punishment or is it too much? Sound off in our poll here!!!