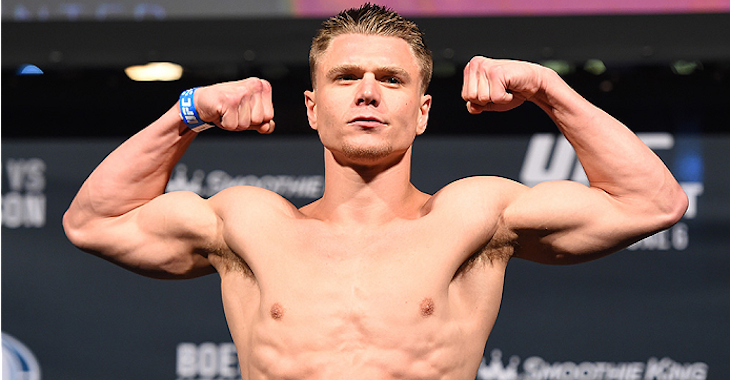 Chris Wade began the fight by throwing a leg kick. Giagos pressed forward and attempted a takedown, but Wade was able to scramble and remain on his feet. Wade landed a stiff jab and followed that up by landing a takedown. Giagos bounced right back up to his feet and landed a good kick to the body of Wade. Giagos lands a solid punch but Wade answers with a hip toss that results in him landing in full mount. Giagos scrambles and is eventually able to get back to his feet. Wade then landed a short elbow that caused a cut to open over Giagos right eye. Round one came to an end with both men battling in the clinch position.

Giagos started round two by pressing forward with some big shots. Wade wasn’t phased by the pressure and responded by landing some good counter strikes on Christos. Chris moved in for a takedown but appeared to slip, allowing Giagos to take top position. Giagos tried to work for a guillotine choke but Wade was able to pop his head out, scramble and end up on top. Wade wasn’t giving Giagos any space to work with and began battering him with some short elbows to end round two.

Giagos opened round three by throwing a big left hand. Wade promptly replied with a right hand of his own. Chris began to throw leg kicks but Giagos was just walking through them. The fighters clinched and after a short scramble they were back on the floor. Wade earned top position but it was short-lived, as once again Christos got back to his feet. Giagos landed a good knee and followed it up with a left hand. Wade decides to shoot in and lands yet another takedown. Giagos got back to his feet in the final minute, but it was to little to late as Wade had clearly scored more points.