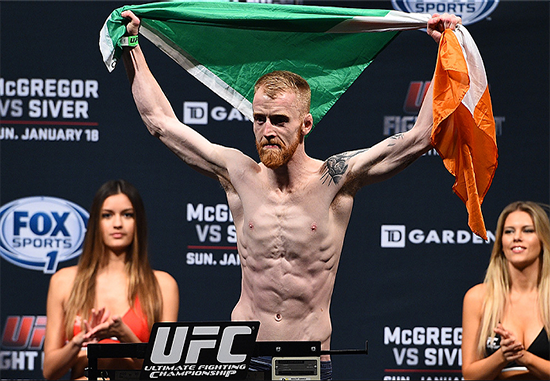 Regardless of what critics are saying of the “Irish Invasion” of the UFC, it is getting increasingly hard to call it “hype”. Patrick Holohan absolutely dominated for fifteen minutes straight and there was no denying he was going to earn the decision win.

Holohan took to the center of the octagon quickly and landed his first takedown just one minute into the bout. Howell was in full defensive mode the second his back hit the canvas, but Holohan still transitioned with ease. Holohan ultimately transitioned to the back of Howell and threatened a rear naked choke twice, but Howell was able to escape both times.

The remainder of the fight saw Holohan pick his spots and attempt submissions while Howell did his best to fight them off. When they were on the ground, Howell would back Holohan up against the fence so he had to room to torque his rear naked choke attempts. Holohan tried to crank a tap out out of his opponent, but Howell was tough enough to make it to the judges’ decision.