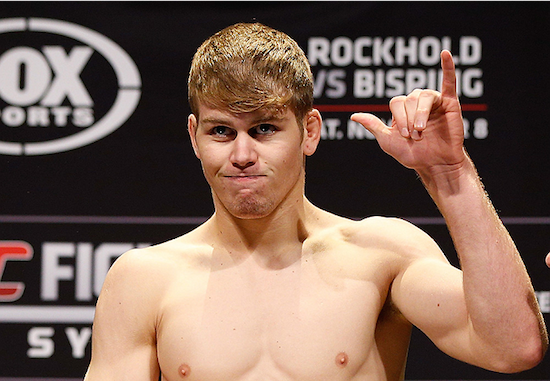 Here we go, the feature fight of the preliminary card!

The undefeated Australian lightweight, Jake Matthews, goes up against the Brazilian, Vagner Rocha.

So far tonight a total of 0 fights have gone to the judges and these lightweights hoped to continue that streak. Both fighters came out looking to get their striking going. Matthews put the pressure on Rocha, landing some leaping punches coming in. One of those shots looked to briefly wobble Rocha, but he recovered quickly. Matthews looked relaxed in front of his home country crowd, playing to their chants by clapping along.

The Australian fighter landed a low kick to the groin of Rocha who took a brief time out to recover. The fight went on and Matthews secured a takedown. At the end of the first round Rocha tried to lock in a kimura from the bottom, but time ran out.

In the second, Matthews continued to land his heavy leg kicks and powerful punches. Matthews leaps in and lands a powerful superman punch that stuns Rocha. Matthews immediately gets a body lock and throws Rocha to the mat. Matthews moves in quick to land ground and pound, than locks in a rear-naked choke without any of the hooks in. Rocha doesn’t tap and goes to sleep. The streak of the night continues, all preliminary fights end in finishes!

Result: Jake Matthews wins via technical submission (RNC) at 1:52 of Round 2.