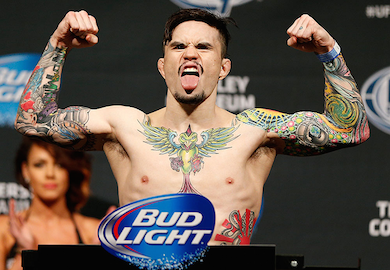 Scott Jorgensen has won for the first time since 2012.

Danny Martinez fought wild in the first round and he paid for it. He opened up the first round with an impressive output of strikes, finding success with his lunging left hand. Martinez started relying on his wild left hand to land often which left him susceptible for takedowns. Jorgensen capitalized on Martinez’s “Power Punch Offense” style of fighting and landed a total of three takedowns and a couple slams in the first round alone.

Martinez returned to the center of the octagon with his strategy committed more to accuracy than power. His corner whipped him into shape between rounds and it paid off for him because the first half of the second round was all Danny Martinez. Martinez scored a knockdown but was not able to finish the fight. Jorgensen finally landed his first takedown of the round with two minutes left where he smothered Martinez until it ended.

Walking into the final five minutes of the fight, it seemed as if everything was even. They each landed around 54 strikes throughout the fight and had one round each. The difference in stats was that Jorgensen landed a total of five takedowns while Martinez had zero. It was obvious Jorgensen’s path to victory was on the ground and he went there almost immediately in round three.

Jorgensen’s takedowns were textbook and worked almost every single time. He would drop down to one knee and grab the knees of Martinez and proceed to drag him to the ground; Martinez was not prepared for the level changing takedowns. Jorgensen landed a total of five takedowns in the final round and even though Martinez landed some BIG strikes, they didn’t mean anything because he over-committed and found himself starting at the lights seconds later.