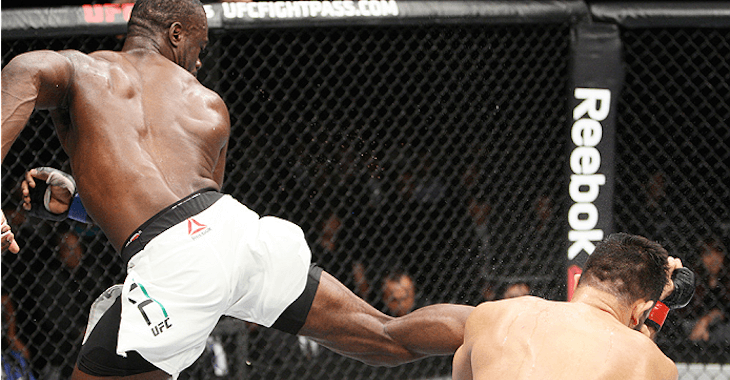 Uriah Hall put the entire middleweight division on notice at “UFC Fight Night 75” last night with his performance against top-tanked Gegard Mousasi. Mousasi put on an impressive opening round and Hall knew he had to turn things around quickly if he wanted to pick up the win in the Saitama Super Arena.

Just twenty-five seconds into the second round of the fight, Hall landed a ridiculous spinning back kick and followed it up with a jumping knee! Needless to say, Mousasi could not take much more after the two shots connected flush on his jaw. He tried to fight off defeat, but Hall jumped on him for the kill forcing the referee to wave the fight. Check out how UFC fighters reacted on social media after the fight!

@UriahHallMMA F'n #UNREAL how does he throw that so hard/accurate! @ufc #ufc #UFCJapan SN DONT EVER KICK ME BRUH. No equipment blocks that!

"These hands…" Uriah hall has killed again. He always looks ashamed after, yanno, after the dragonball Z celebration dance #UFCJapan

That was a lame stoppage! There's a difference between deep shit and done! @ufc @mousasi_mma

A lot respect for @UriahHallMMA but I would love fight you next. @UFC @danawhite @lorenzofertitta make it happen!

@mousasi_mma is my fellow Dutchman and friend but what a beautiful performance by my Jamaican countryman @UriahHallMMA ! congrats!

Congrats @UriahHallMMA out there spinning for the win!!

Looks like there's gonna be some black on black crime in the near future Brunson vs Hall! #UFCJapan