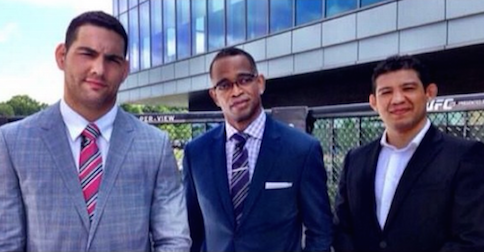 It was recently learned that the world has tragically lost Stuart Scott.

Some of MMA’s biggest figures took to social media with their reactions:

Rip Stuart Scott. He's real inspiration and has always been a strong supporter of MMA. Glad I had the… http://t.co/3cKdfjC7WI

RIP stuartscott such an inspiring guy to be around! http://t.co/xDdO2IcHeb

The sports industry, and the rest of the world lost a great human today in Stuart Scott. He changed the game in… http://t.co/wGrM11nvFR

Last time I saw @StuartScott was at a UFC event last year. Full of encouragement and support, even amidst his battle. Guy was all class.

" When you die, it does not mean that you lose to cancer, "Scott told the audience. "You beat cancer… http://t.co/d7IAKCXpAY

RIP Stuart Scott. Spent every morning with him for a lot of years.

Luv u brother. Thx 4 inspiring so many w/ ur fight! A true angel on Earth! Heaven needs u back now🙏@StuartScott @ufc pic.twitter.com/WV6mAlMHEA