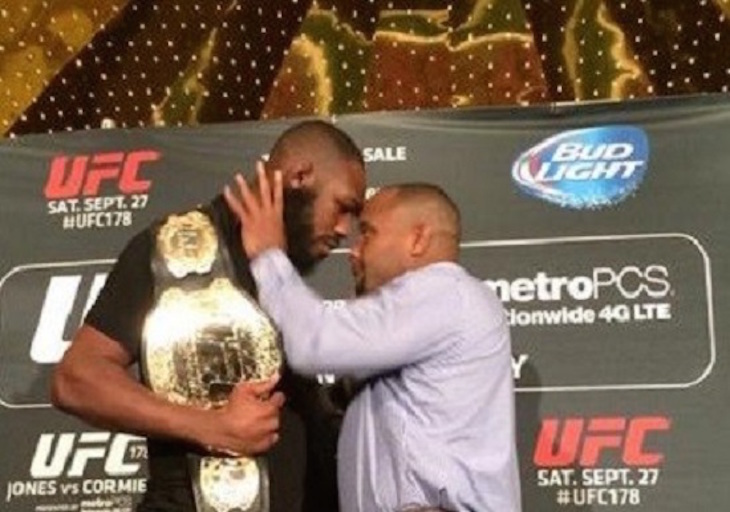 This Saturday, Jon Jones and Daniel Cormier will finally meet in the Octagon. Ahead of the bout, there has been much talk of whether or not ‘DC’ is Jones greatest test in the Octagon.

Recently, we heard from some of the UFC’s biggest stars on who they think will win the bout, and their answers may surprise you.

Johny Hendricks: “That’s a tough one, Jon Jones is a very tough fighter, but I love Daniel, I’ve known him for years. I think he can match his wrestling, I think he’s got the power. Jones could do some stuff to keep hm at bay, but I think Daniel’s going to be able to work his way into the inside and get the job done.”

Josh Barnett: “The superior takedown game is going to keep Jones off his feet and he’s (Cormier) going to be able to ride the fight as much as possible, and then time his way to get in, and hit him with some quality shots while he is there. He’s got quick hands, he’s got quicker hands than Jones but Jones is very range-y, he’s got good reach and his timing and his accuracy is pretty good. In fact I’d say It’s spectacular, and his ability to mix shots up, hand speed, elbows, knees, all together, so you’re not looking at just a singular constant pattern and rhythm to key off of. But to do that Jones needs to establish control, and then take the rhythm of the fight and make it all on his timing. I think Cormier can disrupt that entirely, and when you do, Jones struggles, so Jones is a great wrestler, I have no doubt in that, but he’s not Cormier.”

Anthony Pettis: “Jon jones I gotta go with man, Jon Jones is a champion, been around for a long time. He’s hard to beat, he’s so tall for the weight class, he’s got great wrestling, great striking, It’s hard to go against a guy like that.”

Khabib Nurmagomedov: “Cormier is my brother, my big brother, every time [he] helps me prepare [for] my fight. I want Daniel Cormier smash him, I want. But I think, his wrestling, his spirit, very good spirit, two time Olympian. Very good competition, I think Daniel Cormier [will] win, but Jon Jones is great.”

Felice Herrig: “I can see Cormier definitely upsetting jones, his wrestling is just…beyond extraordinary, and just the way he just manhandled Dan Henderson, that’s gotta say something, and Dan Henderson is another Olympic wrestler. so I’m going for Cormier.”

Jamie Varner: “I think Cormier’s got this, he’s the better wrestler, he’s really athletic. Jones has won a lot of his fights based him just being a better athlete, now I think he’s found himself a tough fight and an equally as good athlete.”

What do you think PENNation? Who takes the belt home this Saturday?