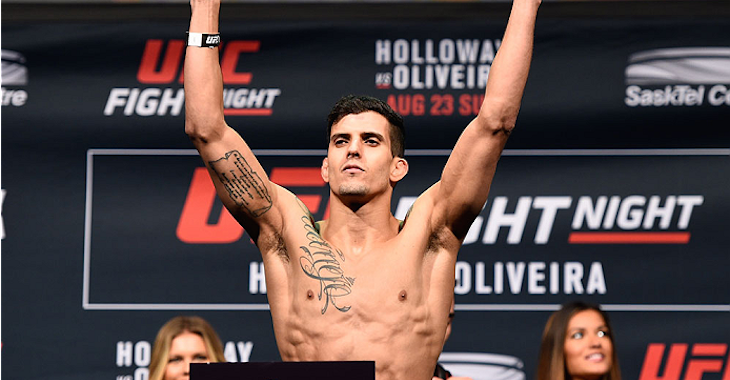 Felipe Arantes move to the UFC’s bantamweight division proved to be smart one as a pulled off a quick submission over Yves Jabouin on enemy soil!

Things weren’t looking up for Arantes early on as Jabouin landed a vicious slam in the opening minute. The slam allowed Jabouin to land directly in side control and while it didn’t lead to anything, Jabouin showed great ground control. Arantes looked like he was being outclassed, but he was being passive and patient, waiting for an opportunity to present itself.

The opportunity presented itself in the form of a triangle when Jabouin sloppily postured up and tried to land a big punch from above. Jabouin escaped with ease only to get caught in armbar attempt, this one fully locked in. Arantes kept the arm close to his body and gave Jabouin almost no room to work with. Jabouin stepped over his opponent and tried to escape the hold, but Arantes was almost belly-down and torqued the hold until Jabouin was forced to submit.

Felipe Arantes def. Yves Jabouin by way of Submission (Armbar) 4:21 of Round 1