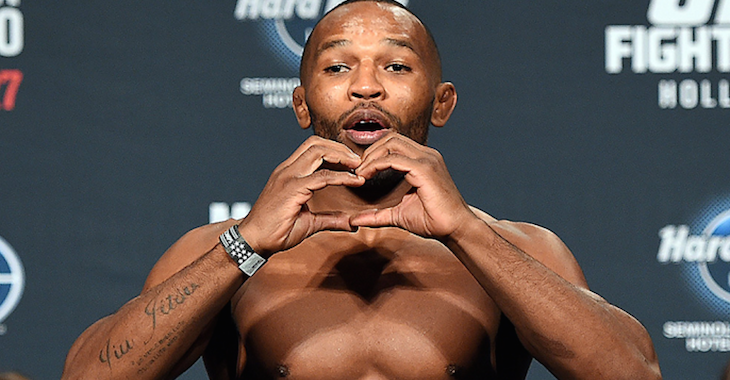 The welterweights stepped in the octagon when Lewis Gonzales went up against Leandro Silva. Note, Gonzales actually missed weight by 3 pounds.

Silva landed a nice leg kick to start things off. Gonzales moved in and got the clinch on the cage. Silva reversed and took the advantage, then landed a nice takedown on Gonzales. Gonzales got to his feet quickly, but Silva put him down again. Gonzales went for a leg lock and then turned it into a takedown of his own. Silva survived a choke attempt from Gonzales and stood up. Silva landed nice body kick. Silva landed another one, then followed it up with a big knee. Gonzales got a takedown and Silva threatened with a leg lock, but Gonzales got out and got on top. Silva then threw his legs up and went for an arm. Gonzales again got out of the submission. Silva pushed him off with his feet and stood up. Gonzales swung with a big punch but missed. Silva threw a big knee and Gonzales countered with a takedown right away. The round ended with Gonzales on top.

In the second Gonzales looked for a body lock takedown, but ended up with a clinch against the cage. Gonzales broke away and landed a few big punches. Silva got the body clinch on Gonzales, on the cage. He lands a nice knee. Silva got the takedown and worked from half guard. Silva tried for an arm bar but Gonzales got free and moved into full guard of Silva. Silva pushed Gonzales off and stood up. Gonzales went for a wild spinning backfist but missed. Gonzales went for a takedown, but Silva sprawled and moved to the back. Silva went for a RNC but was unable to get it before the round  ended.

In the third Gonzales landed a nice right hand early. Silva came in with a nice two punch combo, then moved to clinch. Gonzales reversed position and got Silva on the cage, then Silva reversed. The two of them both landed big punches during an exchange. Silva landed a big counter right when Gonzales came in. Silva moved in with a big knee that looked like it hurt Gonzales. Silva moved quick and tried to work to the back. Gonzales managed to get free and got on top. He started throwing big punches, trying to land anything with time running out.