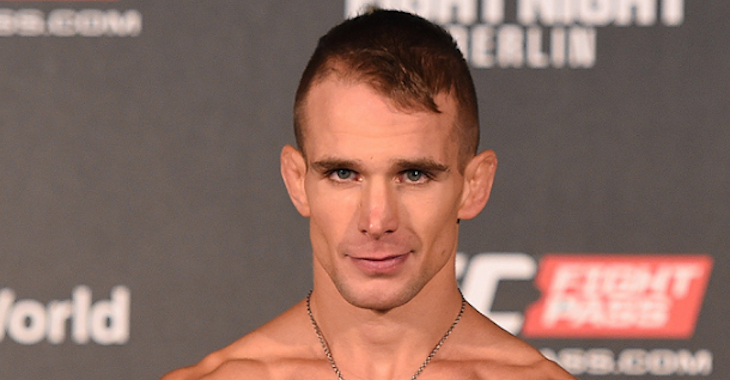 The first fight on the main card just went down between Nick Hein and Lukasz Sajewski.

Fighters came out and went through the feeling out process until they briefly clinched. Hein got off balance and Sajewski tried to take advantage and move in, but Hein got to his feet fast and they clinched. A moment later, they broke free. Hein almost landed a head kick but it was blocked. Sajewski moved in with a knee but Hein grabbed him and took him down for a moment. Sajewski got to his feet, but Hein kept him pinned on the cage, then he broke away. Hein landed a big left, then another one. Again he lands a big left hand while circling away.

In the second Hein landed a body kick. Then a leg kick shortly after. Sajewski moved forward, trying to pressure, but Hein answered with a flurry of big strikes. Sajewski kept pushing forward. Hein seemed content with wanting and landing counter shots. Sajewski got close for a takedown but Hein grabbed him and pushed him to the cage in the clinch, then backed off. Heinz’s footwork seemed to frustrate Sajewski.

Hein landed a big left hand at the start of the third round. Sajewski kept moving forward, but was unable to do much of anything. Hein landed more strikes, more often. After a quick break due to an eye poke suffered by Sajewski, the fight continued. Hein landed a massive left hook that knocked Sajewski off balance for a moment. Hein continued to move and land big counters until the fight ended.