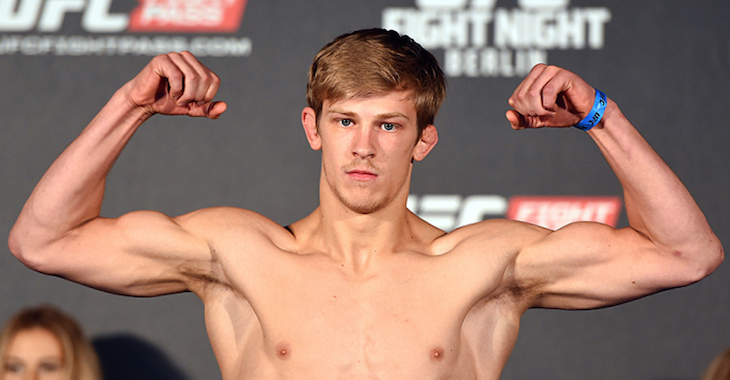 The youngest fighter on the card, Arnold Allen, took on Alan Omer.

Omer landed first, Allen landed a body kick. Omer threw a kick that got caught by Allen, who then returned a head kick. Omer tagged Allen with some nice punches. Allen threw a head kick that was blocked. Omer came in with strikes and ate an elbow on the way in. Omar landed nice knee moments later. Omer landed a hard leg kick. Omer came in with power shots, Allen countered with quick punches of his own. Allen shot in and got a takedown, but Omer locked in a triangle choke with about 45 seconds left. Allen survived and got out before the round ended.

Omer landed a nice body kick to start the second round. Omer got the body lock and took Allen down to the mat. Working from half-guard Omer tried to pass. Allen threatened with a kimura, but let it go and stood up. Omer came in and landed a big right hand. Allen connected with a big left hand, then clinched up with Omer on the cage. Omer managed to get double underhooks and pushed Allen to the cage. Omer got a nice trip, but Allen reversed and wound up on his feet, pushing Omer to the cage in the clinch. Omer reversed, got Allen down and worked to the back. He got on his back in the standing position, but Allen shook him off. The two battled in the clinch more, with Omer gaining the advantage, pushing Allen to the cage.

In the third, Omer and Allen exchanged before Omer got the clinch and eventually got the takedown on the cage. Omer let him get to his feet and tried to time a knee to the clinch. Allen stood up, and while Omer was going for a takedown, Allen locked in a quick guillotine and forced Omer to tap shortly after.

RESULTS: Allen wins via submission (guillotine) at 1:41 of round 3