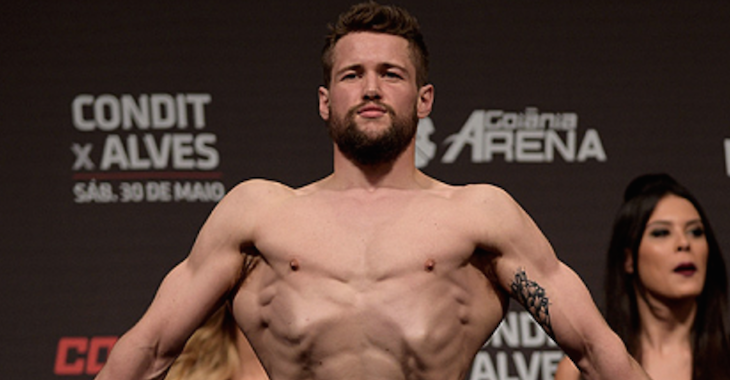 Dalby started things off with a few loud leg kicks. Dalby lands a few more leg kicks. Dos Santos landed a few nice right hands. Dalby ducks under and gets a big takedown. The referee stands the fighters up after little action. Dalby looked for a big head kick but missed. Dalby landed a really nice body kick after Dos Santos missed on a head kick. Dos Santos closes the distance and throws some big punches, but misses. Then he went for a big kick but Dalby ducked under and got the takedown. Dos Santos got free and up but Dalby lands another takedown at the end of the round.

Right away in the second Dos Santo came out swinging. Dalby went for a spinning kick, but missed. Dos Santos kept throwing everything with full power. Both fighters landed solid strikes before Dalby pushed him to the cage and got the takedown. Dos Santos got back up, with his back on the cage, but Dalby stayed on him and eventually got the takedown again. Dos Santos again gets up, this time he broke away from the cage and the fighters moved to the center of the octagon. Dos Santos tried a jump spinning crescent kick, but failed to land it. Dalby landed some nice combos before the second round ended.

In the third Dos Santos landed a big right hand at the start, then a knee to the body. Dos Santos landed a big body punch. Dalby seemed to go for a takedown, but Dos Santos brushed him off. Dalby comes in with two consecutive head kicks, then Dos Santos gets the thai clinch and rips a few knees to the body. Dalby gets him to the cage and started working for a takedown. Dalby rolls backwards and gets a takedown. Dalby went for the back, Dos Santos goes for a kimura, then Dos Santos ends up on top. Dalby is able to get to his fit quickly. Round and fight ends on the feet. Both men performed well in their UFC debut.