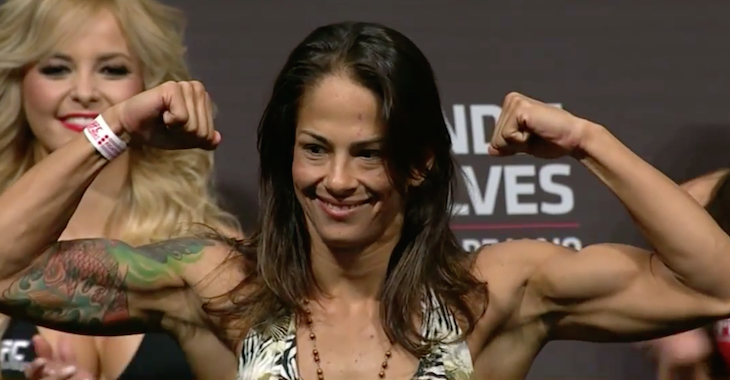 The second fight of the night and last of the UFC Fight pass prelims featured UFC strawweights Juliana Lima and newcomer Erika Almeida. Almeida took the fight on about a month notice, after Jessica Penne was pulled to fight for the title.

Right away Almeida lands a punch, then grabs Lima and throws her down. Almeida was in side control with ah headlock. Lima was able to use her legs and grab Almeida, then she pulled her off. Lima reversed and started working out of Almeida’s full guard. Lima lands some ground and pound, while staying close to the chest of Almeida.

Almeida tried to throw her legs up to get a submission. In a brief scramble they ended up in a mutual leg lock position. Eventually Lima gets the advantage and ends up on top again in full guard. Almeida tired for an armbar, was unsuccessful. The round ended with Lima on top.

In the second Lima got cracked with a punch, then they clinched up. Almeida tried for a throw, failed and ended up on the mat again. Lima again in top position. Lima seemed content being in full guard, landing short ground and pound strikes. Almeida was not doing much to get up. Lima postured up and threw a big diving strike that landed. The referee eventually stood them up because of lack of action. They clinch again, on the cage. Lima worked the thai clinch and landed knees, then she tripped Almeida to the ground.

In the third, both fighters land a few big punches. Throughout the third Almeida started to land some good strikes, but ultimately Lima took it to the ground again and kept it there.