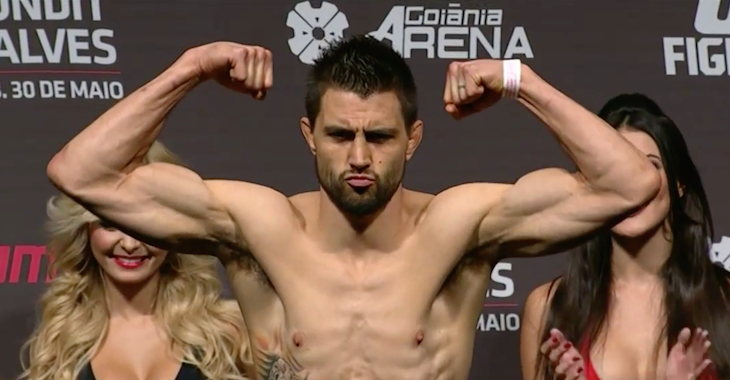 Both fighters met in the center of the octagon. Condit threw the first strike with a head kick. Alves threw a big head kick that nearly landed. Alves landed a nice leg kick. Condit throws a combo that ends with a head kick that nearly lands. Condit attempted a spinning kick, but missed. He tried the same kick shortly after, missed again. Each fighter landed really nice body and leg kicks. Condit’s striking volume was high. Alves landed a nice punch to the top of the head to Condit. End of first round, Condit thew a lot more, Alves had more power in his strikes.

Condit comes out with a combo to start the second. Alves lands a big leg kick. Condit lands a nice punch combo. Alves throws a kick and gets cracked with a big elbow. Alves gets hurt and moves back quickly. Condit moves in for the finish. Condit gets on top position and unloads strikes. Alves survives and gets to his feet, where he almost locks in a guillotine. Condit gets free and they both go back to striking. Condit lands a few big elbows to Alves’ head, then throws him to the mat. Condit positions and tries for a rear naked choke. Again Alves gets free. Blood is everywhere, coming form Alves. Condit still on top until Alves manages to get to his feet. Alves lands some really nice kicks and then a left hand. Both guys are throwing like crazy. Condit gets a takedown at the very end of the round.

In the corner between rounds the doctor checks on Alves nose, that is obviously broken badly. The doctor decides the fight needs to be stopped.

RESULTS: Condit wins via TKO at end of round 2 (doctor stoppage)