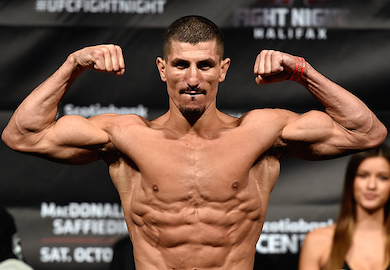 The pair of welterweights were happy to stand and bang from the fights opening bell.

The fighters traded shots for the better part of 3 minutes before Jingliang used a judo throw to send Taleb to the floor. The Canadian quickly bounced back to his feet however, and landed some good shots to finish the opening round.

Jingliang picked up his pace at the start of Round 2, throwing a large volume of shots at Taleb, which resulted in a cut over the Canadians left eye. After a wild exchange, Taleb was able to land a takedown on his Chinese opponent. Li was only on his back momentarily, before rising to his feet and landing a takedown of his own.

The second round closed out with Jingliang controlling Taleb from back position.

Jingliang continued to utilize a high volume of punches and kicks to begin the third and final round. Both fighters landed some stiff jabs, which resulted in both men being bloodied up. Li landed a takedown midway through the round but Taleb quickly got back to his feet. Taleb ended up landing a takedown of his own and finished the fight from top position while delivering some solid ground and pound.

Stay tuned to bjpenn.com for all the UFC Fight Night 54 results!