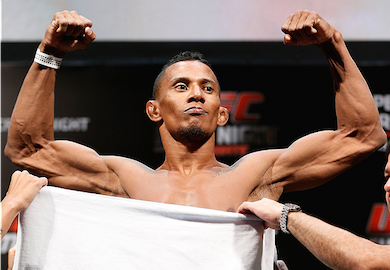 Both Iuri Alcantara and Russell Doane showcased their skills in the octagon tonight and it could have been anyone’s fight walking into the judges’ decision. However, when all was said and done, it was Alcantara walking out of the cage with his hands raised.

Doane utilized his wrestling skills to control Alcantara and put him on his back. Doane took him down several times, but he never followed up with a threatening attack. He seemed content with simply gaining top-control time.

Alcantara, however, was effective with his defense off of his back. He constantly worked for submissions and once he got up to his feet he was the aggressor in the striking department. He nearly finished Doane in the opening moments of the fight when he quickly gained back control and locked in a rear naked choke. Doane showed great heart as he endured the crank of Alcantara while he worked for an escape. Alcantara realized he was not in a position to submit Doane and released the hold shortly thereafter.