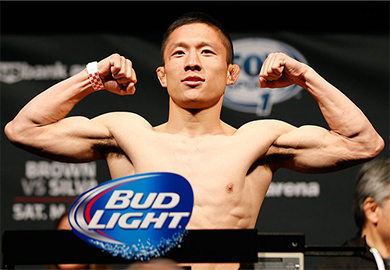 Kyoji Horiguchi and Darrell Montague fought for flyweight supremacy in the second to last fight of the preliminaries. The bout followed a series of exciting fights so when the action didn’t kick off immediately, the crowd was quick to voice their disapproval. It wasn’t that they weren’t throwing punches; Neither man could find a comfortable distance to strike from.

The crowd came back to life when Montague trapped Horiguchi in a guillotine at the start of the second, but Horiguchi defended well and escaped the hold within seconds.

Horiguchi damaged Montague with a body kick in the middle of the second round and it caused him to slow down a bit. Horiguchi was methodical in his attack and did not try to finish the fight right away. Instead, he picked his shots and continued to chop at the body of his opponent. Horiguchi landed a series of shots at the end of the round that left Montague a stumbling mess. When the round ended, Montague almost fell down walking to his stool.

Darrell Montague did not help himself in the third round by holding back and opting to be a counter puncher. It was a definite possibility that he was down two-rounds-to-none in the third and he should have been more active. It was no surprise when the judges announced Horiguchi the victor.