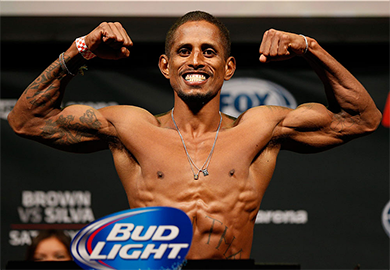 Eddie Wineland was ranked fourth walking into the octagon, but who knows how far he will fall after losing to unranked Johnny Eduardo.

The first round was close but it was clear Eduardo was getting the best of his opponent. Wineland and Eduardo landed the same amount of punches (12), however Wineland threw 42 more! Eduardo was quick and precise with his counters and it was evident his confidence was building as the fight went on.

Johnny Eduardo stumbled Eddie Wineland with a right hook on the jaw that backed him up. Eduardo smelled blood and blasted him with a HUGE right hook. Wineland was out on his feet, fell to the mat and was clearly out cold. Herb Dean stepped in and called a stop to the fight with less than thirty seconds remaining.

Johnny Eduardo def. Eddie Wineland by way of KO (Punches) 4:37 of Round 1