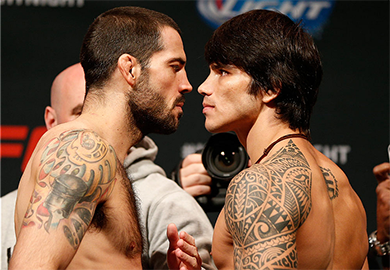 If you’re not in Ohio today with tickets in-hand or can’t catch the televised card, follow along with us here as we break down every blow, every submission, and ever strike, in real-time, right here in this very thread.

Round 1: Fighters touch gloves. Head kick misses form Smolka. Body kick from Smolka. Fighters clinch up. Smolka has Cariaso on the cage. Smolka landing knees to the legs of Cariaso. Smolka was going for a throw but failed. Still landing knees to Cariaso’s body. Fighters break away. Body kick from Cariaso. Another body kick, then Smolka gets the clinch again, has Cariaso on the cage. Smolka drops for a takedown. Tries for a single leg, but Cariaso goes for a guillotine. The round ends. 10-9 Smolka

Round 2: Cariaso comes out swinging. Lands a few good shots, then they clinch on the cage. Cariaso gets the back of Smolka as they drop to the mat. Smolka trying to roll, manages to shake Cariaso off. Cariaso on bottom, with Smolka in full guard. Smolka landing body shots. Cariaso goes for a triangle, then switches to am armbar but Smolka gets to his feet and out of trouble. Smolka has Cariaso on the cage. Knees to the body from Smolka. Cariaso works to get his back off the cage, but Smolka puts him right back on it. Cariaso gets a trip takedown. Cariaso postures up and tries to land big shots. Both fighters get to their feet. Cariaso lands a big combo. Smolka tries a superman punch, but Cariaso counters with a shot of his own. Smolka gets a takedown, Cariaso is holding on to the neck. Cariaso locks up a ninja choke, and it looks deep but the round ends. 10-9 Cariaso.

Round 3: Body kick from Cariaso. Leg kick from Smolka. Cariaso landing good combos. Body kick from Cariaso. Leg kick. Another leg kick. Smolka lands a body shot. Smolka clinches and tries to go for a trip, gets it, has Cariaso on the cage in top position. Cariaso sets up an omoplata but fails and Smolka gets to mount. Cariaso gets to his feet but is still against the cage. Smolka gets a trip takedown, both fighters get up. Cariaso lands some good body shots. Leg kick  from Cariaso drops Smolka, who gets up right away. Cariaso landing lots of leg kicks now. Smolka turning up the pace, Cariaso still landing leg kicks. Another throw from Smolka but Cariaso ends up on top looking for a guillotine. Cariaso 10-9

Round 1: Leg kick from Magny. Another leg kick lands. Magny keeping the jab out there. Elbow lands for Means. Magny lands the jab. Means tries to close the distance. Knee to the body of Magny, they clinch, Means looks for an inside trip, doesn’t get it. Means lands a leg kick, but Magny catches it and lands a straight right. Magny gets a body lock and the takedown. Both fighters get back to their feet. Mahny with a body punch. Means misses a spinning attack. Means unable to find range. Means lands a big left. Magny drops Means with a left hand, but he gets up right away. Magny has Means on the cage in the clinch. Rounds ends, 10-9 Magny

Round 2: Means misses with a combo. Magny tries to clinch. Leg kick from Magny. Means misses a lazy flying knee. Means lands a nice left elbow. Goes for a head kick, misses. Means misses with a side kick. Means gets Magny to the mat, is in side control. Magny gets against the cage, Means lands some really good knees. Magny able to get away and up. Side kick lands for Means. Magny able to get Means on the cage, trying for a takedown. Lands some knees to the body. Means reverses and breaks free. 10-9 Magny

Round 3: Leg kick from Magny. Means moves forward. Means tries to land a short elbow inside but misses. Magny lands a body shot. Magny goes for a takedown, gets reversed, Means lands a huge knee to the head. Magny gets away from the fence. Magny goes for a takedown again. Means goes for a ninja choke, able to get Magny down, but gets right to his feet and able to get Means against the cage. Magny landing knees to the body. Magny gets a trip takedown. Gets to the back of Means but Means stand up. Magny has him on the cage. Magny going for another trip. Pressing Means on the cage, Magny gets the body lock takedown. Magny has the back, with both hooks in. Now only one hook., Gets them back in. Means tries to get out, Magny is in half guard. Means gets to his feet and slams Magny with the final seconds. 10-9 Magny.

Round 1: Potts misses with a leg kick. Misses again. Palelei gets a takedown, working from side control. Potts gets caught in a choke but rolls out of it. Palelei is still on top in Potts’ guard. Potts goes for a triangle. Gets free. Palelei in side control now. Now mount. Palelei lands a short punch that puts Potts out. Fight over.

Round 1: fighters touch gloves. Big kick from Brown, Silva goes for a takedown, Brown reverses and gets to his feet. Body kick from Silva. Another body kick that drops Brown. Silva rushes in, Brown grabs the leg of silva and is trying to recover. Silva gets to Brown’s back. Silva has both hooks in. Silva going for the choke. Brown trying to survive but Silva still on his back going to submission. Gets Brown’s arm trapped. Now its free. Brown scrambles and gets to his feet! Brown lands a knee elbow combo. Brown is putting it on Silva. Has Silva on the cage landing elbows and knees from the clinch. they break away. Silva lands a body shot, Brown sweeps him and gets the takedown, Brown throws him down again from the clinch. Both fighters standing. Brown lands a straight right. Brown gets another takedown. Lands a elbow from the guard. Round Over!!! What a Round! Close one but Brown ended strong, 10-9 Brown

Round 2: Brown lands a big knee that sends Silva back. Body kick from Silva looks to have hurt Brown, but Silva doesnt rush in. Brown still bringing the pressure. Silva has Brown on the cage they break free. Brown with a liver shot. Brown lands a big uppercut. Then knees to the body. Another uppercut from Brown, Silva looks tired. Brown just teeing off on Silva, who keeps stepping back. Brown keeps the combos coming, but gets hit with another body shot, Brown gets the take down. Brown in side control landing elbows to Silva. Has a reverse triangle. Silva gets free. Brown still on top, going for a darce choke, then moves to mount. Brown unloading on Silva. Brown goes for armbar fails but goes right to triangle. Silva gets free. Not Silva is on top. Brown trying to get to his feet but Silva keeps him down. Round ends, Brown 10-9

Round 3: Body kick from Brown. Brown still coming forward, has Silva on the cage, landing knees to the head. They move away from the cage. Brown goes for the takedown and gets it. Is in Silva’s full guard. Brown landing punches. Big shot from Brown. Elbow lands. Silva goes for a triangle but Brown posture out of it. Brown raining down punches, the referee telling him to defend himself. Silva turns over and curls up, Brown lands one more knee to the body and the referee stops it.