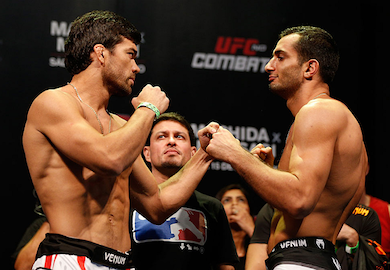 As always, BJPENN.COM will be providing live coverage of tonight’s event with this blow-by-blow and round-by-round play-by-play thread.

Catch all the action with us right here when the main card goes live at 7:30 p.m. PT.

Round 1 – Ogle opens the fight with a one-two combo. Oliveira secures a takedown and can scoot up to mount if he wants. He is in mount, now. He is trying to work a head-and-arm choke, but abandons it. Oliveira has the back of Ogle. Hooks are in, and Oliveira transitions to a body triangle. He is working for a rear naked choke. Ogle stands up and is trying to shake Oliveira off. Ogle is getting tired. Ogle cannot carry his weight anymore and drops Oliveira on his back, it does not effect the body triangle. Ogle breaks the body triangle, but Oliveira locks it back in. Horn sounds. That was a long five minutes. 10-9 Oliveira

Round 2 – Ogle defends two takedowns and actually ends up on top of Oliveira. Oliveira makes his way back to his feet and eventually takes down Ogle. They make it back to their feet and Oliveira almost lands a guillotine choke after Ogle defends a third takedown. After a quick scramble, Ogle actually took the back of Oliveira but it led to nothing. Ogle slams Oliveira on the mat and he is trying to transition to side control. Oliveira slaps Ogle back in his open guard. Oliveira slaps Ogle in the face from the bottom. Ouch. Oliveira eventually takes the back of Ogle and as Ogle tries to stand up, Oliveira lands a brutal knee. The round ends with Ogle defending a rear naked choke again. 10-9 Oliveira

Round 3 – Ogle gets dropped by a short left! Oliveira hops on him and tries to end the fight with a submission but Ogle regains his composure and is back on his feet. He lands a takedown on Oliveira. OliveOgle lands ira makes it back to his feet. Ogle lands another takedown but he walks into Oliveira’s triangle choke attempt! Ogle taps after Oliveira locked it in.

Charles Oliveira def. Andy Ogle by way of Submission (Triangle) 2:40 of Round 3

Round 1 – Musoke opens up the round with a big right hand. Andrade lands a takedown 45 seconds into the fight. Musoke has Andrade in his guard. Andrade is peppering him with weak punches. Musoke stands up and Andrade lands a knee to the body as he separates. Andrade drops Musoke with a huge right hand and celebrates! Musoke is still awake though. Andrade dives in and goes for a finish but Musoke almost locks in a triangle. Hilarious. Andrade is going for donkey kong punches but they’re not landing. Musoke has recovered, Andrade needs to make sure he does not blow his wad. Musoke makes it back to his feet and they exchange shots until the end of the round. 10-9 Andrade

Round 2 – Andrade tries to land the overhand right again but whiffs. Musoke presses Andrade against the fence and is looking to grapple his energy away. Musoke is landing the jab at will. Musoke catches Andrade with a left high kick to the head. Musoke lands a couple right hands of his own and goes back to pressing Andrade against the fence. He takes Andrade down and peppers him up with shots. The round ends with Musoke slapping Andrade with punches. 10-9 Musoke

Round 3 – Musoke is fully controlling the octagon. Andrade is whipping his arms around, hoping a punch will land. He is very tired. Musoke presses Andrade up against the cage. Musoke takes Andrade down and takes his back. Both hooks are in. Musoke transitions to a body triangle and is looking for the rear naked choke. The round ends with Andrade trying to scoot around and gain top control, but Musoke’s body triangle was too tight. 10-9 Musoke

Erick Silva def. Takenori Sato by way of KO (Strikes) :52 of Round 1

Round 1 – Carmont keeps Souza at bay with a push kick. Souza almost landed a spinning back heel kick. Souza takes Carmont down and has the back of Carmont. Body triangle locked in for Souza. He’s working for a rear naked choke. Carmont grabs an arm and is trying to turn and face him, but Souza gets his arm back. They’re battling for wrist control, back and forth. Souza wraps his left arm around the neck of Carmont. Carmont traps Souza’s wrenching arm and frees himself. Round ends with Carmont turning around and settling down with being on top. 10-9 Souza

Round 2 – Souza is landing overhand rights but Carmont is eating them up and mocking his opponent. Carmont is looking to land an overhand right, now. Souza slips and pops right back up. Souza presses Carmont up against the cage and Carmont pushes him off. Carmont catches him with a short left hand and he follows it up with a nice combination. Souza whiffs a headkick and Carmont mocks him. Carmont ducks down and almost eats an uppercut. Souza shoots for a takedown. Carmont fights it off and the round ends with the two trying to land something significant. 10-9 Souza

Round 3 – Souza is trying to close the distance. Carmont needs to end this fight if he wants to win. Souza ducks under a hook and he transitions right to mount. Souza transitioned to back mount and almost locked in the rear naked choke, but Carmont escapes and starts cage-walking his way to his feet. As he turns away from Souza, he exposes his back. Souza takes his back again. Souza locks in the rear naked choke but Carmont is able to scoot out of it. The horn sounds and the crowd erupts for the likely decision victory of Souza.

Round 1 – They open up with a touch of the gloves and we are underway! Mousasi flinches hard at a leg kick fake from Machida. Machida is doing what he usually does: Waiting. Machida lands a strong body kick, flush. Inside leg kick lands for Machida. Mousasi lands a left handed jab. Machida lands an uppercut as Mousasi ducks down, trying to evade a fake punch. Mousasi lands a leg kick as the horn sounds. Not a lot of significant shots landed for either man, but Machida landed more clean shots. 10-9 Machida

Round 2 – Machida goes on the offensive right away with a jumping switch kick which is blocked. Mousasi’s overhand right almost lands. Inside leg kick from Machida. Machida tries to get in and out as he throws a two punch combo, but Mousasi cuts him off with a jab. Machida lands a HUGE head kick. Mousasi is fine, though. He caught the leg after it landed and tried to go for a takedown but failed. Mousasi lunges and throws a right hand which whips Machida’s head back. Leg kick from Machida. Mousasi lands an outside leg kick at the end of the round. 10-9 Mousasi

Round 3 – Mousasi has Machida pressed against the fence and throws a high kick that misses. Mousasi is controlling the center of the octagon. Mousasi’s takedown attempt is failed. He pushes Machida against the fence. Machida lands a nice left hand that causes sweat to fly from Mousasi’s face. Spinning back kick to the body from Machida. Another high kick from Machida. Machida lands yet another high kick after setting it up with punches to the midsection and head. Right jab from Mousasi. Great combination for Mousasi lands— a right and a left. Inside leg kick from Mousasi gets checked. Machida acts like he’s going to set up a big kick with ten seconds left, but the horn sounds and they head back to the corner. 10-9 Machida

Round 4 – Mousasi lands a takedown but Machida scrambles his way back to his feet right away. Machida throws Mousasi to the canvas with a foot switch. He’s moving into half guard. Mousasi has let Machida transition to side control, but gets him back to half guard. Mousasi traps a leg of Machida and sweeps him. Mousasi is in half guard. Machida gets him back to open guard and Mousasi is staying busy, peppering his opponents with shots. Mousasi is working on a guard pass and is trying to take control of Machida’s back. Machida pushes him off and towers over Machida as Mousasi lands an illegal upkick. The fight pauses and resumes and the horn sounds two seconds after. 10-9 Machida

Round 5 – Machida tries a cartwheel kick but it’s blocked by Mousasi. Mousasi goes in for a punch but is cut off by Machida’s knee. Big knee to the body by Machida. Machida has blood running from his nose, likely due to the fact that he has eaten so many knees. Mousasi shoots for a takedown but Machida finds himself on top. Machida is in mount. Machida has the back of Mousasi and has both hooks in! Mousasi has wrist control. Mousasi tries to shake him off to no avail. Mousasi escapes and Machida jumps up to his feet, ready to defend. He sees Mousasi still on the ground and jumps to drive his fist in Mousasi’s face and lands! The horn sounds and we are done. 10-9 Machida