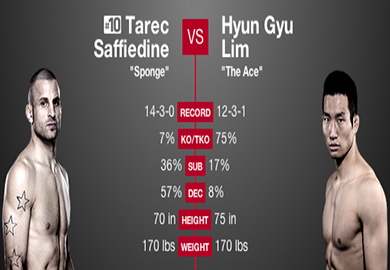 Tarec Saffiedine and Hyun Gyu Lim put on a war in Singapore!

Even though it was Hyun Gyu Lim that was dictating where the fight went, Tarec Saffiedine was getting the better of striking exchanges. As expected, Saffiedine utilized his leg kicks and changed his stance multiple times which kept Lim guessing. Lim would land knees to the body every now and then, but Saffiedine was never in danger with those shots.

What did cause Saffiedine trouble though, was the fact that his kicks kept getting caught. Lim was quick to counter multiple times and sent Saffiedine falling to his bum after popping him with a jab. The fight was never in danger of ending whenever this happened, but it prevented Saffiedine from getting in a striking grove while standing.

After a close first round, both men played it safe and tried to avoid power strikes in the second. Saffiedine’s guard now included him blocking his body, which showed he had adapted to the knees Lim wanted to connect with. Saffiedine got the better of a punching-exchange at the beginning of the round and Lim was on wobbly-legs for a few seconds before fully recovering. Saffiedine showed patience and didn’t go in for the kill as he returned to his original gameplan of picking his shots. Saffiedine walked back to his corner at the end of the second feeling confident he won the round.

Saffiedine found success changing levels and attacking the legs, body and head in the second round so he implemented that strategy in the third as well. Whenever Lim would wobble from getting punched in the skull, Saffiedine would follow it up with an unblocked leg kick. The leg kicks started to take a toll on Lim and he fell to the ground after Saffiedine landed two in a row. Instead of inviting him back to his feet, Saffiedine followed him down and worked on his ground and pound. The referee stood them up after Saffiedine became content with just landing soft punches and it wasn’t long before Lim crumbled to ground from more leg kicks. Lim was sporting a bad limp on his way back to his corner at the end of the third round

Lim’s team tried to get him to strike hard and fast because they knew he wouldn’t last long if he ate anymore leg kicks. Saffiedine went back to changing levels just like he did in the second and third rounds. Whenever Lim fell from a leg kick and got back to his feet, Saffiedine would throw head kicks. Lim ate a flying knee and once again made his way to the canvas where Saffiedine soon followed. The fourth round ended with Saffiedine towering over Lim, landing soft strikes.

Hyun Gyu Lim let out a warrior cry at the beginning of the fifth round and proved to the crowd that he would simply not quit. The output of his strikes multiplied tenfold from what he was throwing in the fourth and at one point it seemed he was actually winning the round. Saffiedine would crash his leg into the thigh of Lim and he would double over in pain, but he’d posture right back up seconds later and go back to pressing the action.

Hyun Gyu Lim is one of the toughest men to step foot into the octagon.

Tarec Saffiedine circled around Lim and kept the fight standing. Every time Lim fell down, he would make the referee stand the action back up. With only a minute left, Lim dropped his hands and started swinging for the fences. The crowd was behind him 100%, but Tarec Saffiedine wasn’t buying it one bit. Lim took advantage of being underestimated and wobbled Saffiedine with fifteen seconds left to go.

Lim chased Saffiedine around the octagon and tried to end the fight before the final horn sounded, but it was too late. The round ended and the two were separated. Lim collapsed to the ground in pain and Saffiedine relied on his corner to keep him on his feet.

Both men put on a hell of a show.