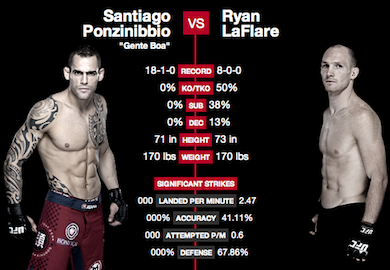 Ryan LaFlare did a great job in the first round countering Ponzinibbio’s leg kicks with takedowns. It happened a number of times in the first round and it gave a lot of “offensive time” to LaFlare. LaFlare was constantly working for transitions and submissions so he was never in danger of being forced to stand up by the referee. Ponzinibbio defended well and made it back to his feet every single time he was taken down. He almost walked into an arm-lock submission, but a scramble led to Ponzinibbio taking LaFlare’s back.

The second round looked like it would be much of the same from the first when LaFlare secured a takedown in the opening minute. Ponzinibbio popped right back up to his feet however, and a feeling out process of body shots and missed head kicks followed. Ponzinibbio connected with a few shots that caused LaFlare to peddle back and it looked as if Ponzinibbio was going on the offense, but he got wobbled by a counter punch that led to a LaFlare takedown. The round ended on the ground and we walked into the third with LaFlare essentially up 2 to 0.

It wasn’t a surprise when the judge’s decision was announced that Ryan LaFlare was the victor.