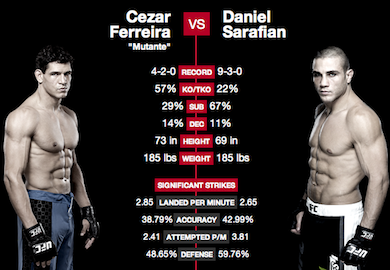 After such an exciting night of fights, it was a surprise to see this fight leave the first round. As a matter of fact, most of this fight was rather uneventful.

Daniel Sarafian landed a few big shots that brought the crowd to life, but it was Cezar Ferreira’s takedowns that decided the outcome of the fight.

Ferreira was in danger of losing the bout in the second round after he got wobbled by a powerful punch, but Sarafian didn’t attempt to follow up and finish the fight. He found himself on his back seconds later, much like he did for the rest of the fight.

Ferreira was perfectly fine with letting the fight go to decision as he spent a majority of the third round taking Sarafian down and not following up with any action. At one point, they were stood up and Sarafian was taken down seconds later. The bout ended with Ferreira attempting a rear naked choke, but he was saved by the bell.