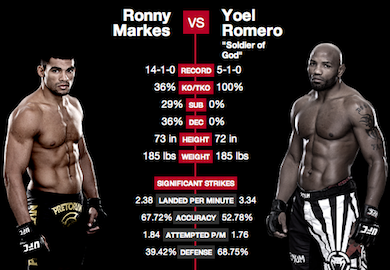 Yoel Romero showed great versatility and knockout power in his performance tonight. To quote Joe Rogan, “That man’s something.”

Romero has about as odd of a striking game as you’ll see while watching the UFC. In the first round, he threw oblique kicks and body shots to soften up his opponent. Almost nobody expected Markes to take the wrestler down, but Romero ended up on his back twice throughout the opening round. Romero showed grit and determination by getting back to his feet within seconds. After getting back to his feet he showed calm explosivity in his striking. He would set up powerful shots by slowly pawing at Markes, letting the hard shots take his opponent by surprise. The first round was essentially a toss up, but the fight started to get carried away in the second.

Romero showed dominance early on and it was evident that Markes was beginning to gas. The vicious body kicks from Romero were starting to take a toll on Markes fatigue and he would collapse to the mat when Romero connected. The sequence was repeated a couple times until late in the round where both fighters turned up the volume of strikes, but the flurries eventually led to nothing.

The fight ended in the third round when Romero finally connected with a shot that would end it all. Markes had his back up against the fence and Romero connected with a brutal left hand. Markes collapsed to the mat and his eyes were open but it was clear nobody was home. Romero landed a couple shots before the referee peeled him off, calling the fight off.