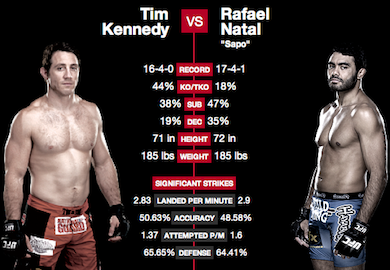 Tim Kennedy walked into the octagon with the support of the troops and was fired up before the bell even started. Though he was so excited for the fight to start, his striking was very cautious and it hindered him early on. It took everyone by surprise that Rafael Natal was getting the upperhand by utilizing leg kicks. A welt was forming on Kennedy’s left leg, but it was not effecting his ability to press the action.

After whiffing on a couple leg kicks, Kennedy connected with a brutal left hook that sent Natal crashing to the mat! Kennedy smelled blood and dove on Natal, landing repeated shots until the referee pulled him off.

Tim Kennedy defeated Rafael Natal by way of TKO (Punches) 4:40 of Round 1