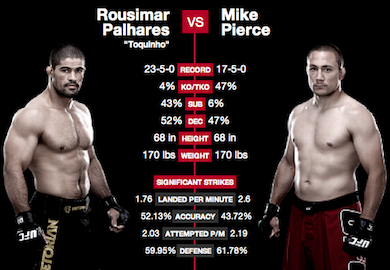 In a fight that lasted only thirty-one seconds, Palhares secured two leg locks! Pierce was lucky to escape the first, but by the time Palhares locked in the second one he had no choice but to submit immediately. Palhares not only took home another leg home, but likely a Submission of the Night bonus as well.