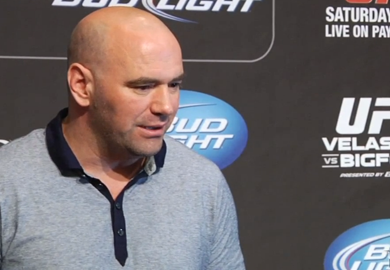 “That might sound f— mean and harsh and [mocking tone of voice] ‘why should somebody not matter, everybody matters.’ We’re getting to where we are in a society now where, everyone wins a trophy. No, everyone doesn’t win a f— trophy. The guys who stand out and the guys who make it exciting, the guys who raise to the top are the guys who deserve the money.”

“We get a show with a bunch of guys who want to push against the f— fence and stand there for 15 f— minutes and try to squeak out a win? How many people do you think are gonna tune in next Saturday? And if this keeps continuing, this becomes f— boxing, where guys keep running around in circles and nobody fights and you walk away going ‘this fight sucked.'”

“Look how long Sam Stout is in the UFC,” White said. “Sam Stout is a guy who, he hasn’t won any world titles, he hasn’t been talked about as one of the greatest fighters or the top contenders or any of that s—. Sam Stout is a f— animal who comes out and loves to fight and every time he comes out to fight he puts on an amazing show.

“Joe Lauzon is not seen as the top guy in his division,” White continued. “He’s not the champion. Do you know how many people go f— crazy when I saw Joe Lauzon is on the card? Because people love to watch him fight. Joe Lauzon has won more fighter bonuses than I think anybody. If you are that guy, the system works for you. But if you are not that guy, then boo f— hoo, you don’t matter.”