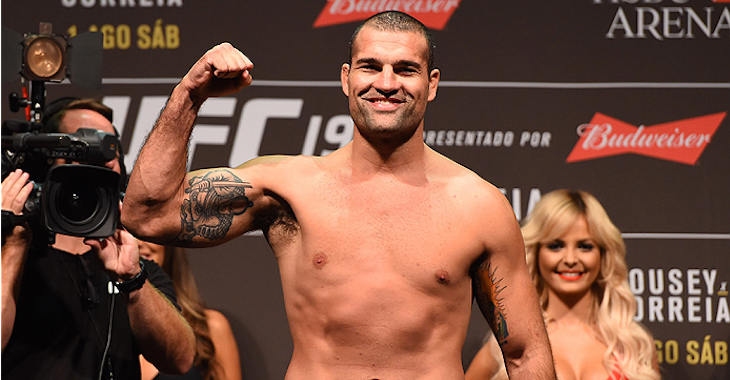 Even though the finals of both “Ultimate Fighter: Brazil” fights were filled with technique, this bout between Antonio Rogerio Nogueira and Mauricio “Shogun” Rua truly brought the crowd back to life.

The opening round saw both PRIDE legends get tagged to the point of almost getting knocked out. Nogueira found his range late in the first with a left hand that wobbled Shogun; if it wasn’t for the fence, Shogun would have tumbled to the canvas. Nogueira landed five tough shots while Shogun was recovering on the fence, but he couldn’t get the job done.

Shogun’s defense while recovering consisted of him keeping his head down while winging punches. One of the punches actually landed and sent Nogueira wobbling backwards and that would ultimately save Shogun, allowing this war to go to a second round.

Shogun brought the pace of the fight to a screeching halt when he shot for a takedown as soon as the second round started. Nogueira spent nearly half the round on his back before making it back to his feet where both fighters found success striking.

It was clear that the fight would be going to decision after the conclusion of the second round, but it was Nogueira’s lack of head movement that ultimately decided the fight. Shogun was diverse in his striking, but his kicks and punches could be read from a mile away and he connected regardless. After the announcement was made that Nogueira had lost, the fans in attendance voiced their disproval of the fan-favorite.

Still, “Shogun” was able to get the crowd back on his side after his post-fight interview.