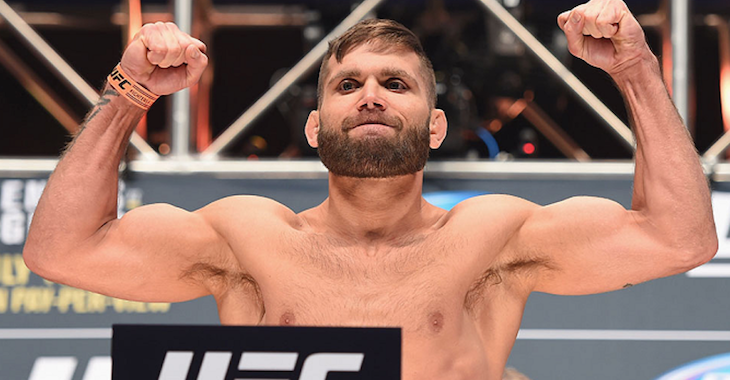 Featherweights Dennis Bermudez and Jeremy Stephens squared off in the octagon in the third fight of the night’s main card.

These two went at it right away. Bermudez got dropped early. Stephens tied to go to the ground to finish, but Bermudez got to his feet. Then Bermudez rocked Stephens. They clinched and Bermudez got the takedown. Stephens got cut early.

Bermudez tried to take the back. He started pounding on Stephens, who was bleeding, a lot. Bermudez positioned himself and tried for an arm triangle, then he moved to an armbar. Stephens got out and up to his feet. They broke away from each other. Stephens face was covered in blood. They were both swinging at each other. Bermudez went for a takedown. He didn’t get it and instead clinched Stephens on the cage. That’s where the round ended.

In the second they both came out and tried to land leg kicks. They both connected. Bermudez got rocked again and Stephens tried to finish. Bermudez was hurt bad. He managed to recover. Then moments later he got dropped rocked again. Then Bermudez came forward and landed a front body kick that sent Stephens back and to the ground. He stood up quickly and Bermudez tried a flying kick, but missed. Both fighters were throwing bombs. Bermudez moved in and got the clinch on the cage. Stephens tried for a takedown late in the round but failed.

In the third the two went at it again. Then, well, then Stephens landed a perfect flying knee that put Bermudez down. He followed up with punched until the referee stepped in.

RESULT: Stephens wins via TKO at :42 of round 3