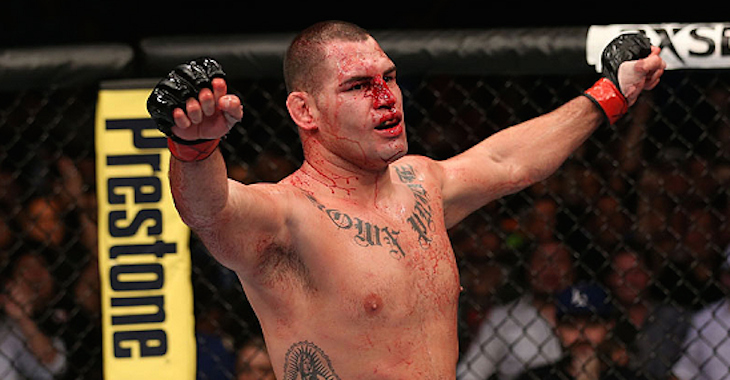 Fighters often mention that there is never a night where they are walking into the cage feeling 100%. Mixed martial arts is such a physically demanding sport, and if an athlete wants to fight in the UFC, they better be willing to train 110% every sparring session.

Manny Pacquiao stepped into the boxing ring in May for his super-fight with Floyd Mayweather with a shoulder injury. Likely part of strategy so “Money” wouldn’t target it, “Pac-Man” chose not to disclose the injury to the commission. Pacquiao put in a losing effort, and chose to announce his shoulder issues in his post-fight speech.

What some fans viewed as an explanation, others viewed as an excuse. Velasquez talked about how fighters generally sound when they talk about their injury after a loss, and it seemed as if he was on the fence about it.

“There are some cases where people can say you’re making excuses, you know?” Velasquez told BJPENN.COM. “Then again, it all depends on the people and their opinions. If you say right away afterwards, ‘Hey, I was injured,’ then it looks like you are making excuses.”

Velasquez tried not to blast fighters who talked about their injuries after a fight because he has walked into several bouts with lingering injuries.

“Every fighter that I know of has an injury here and there going in. I’ve fought with an injury before. You don’t disclose it,” Velasquez explained.

“Why are you gonna let it out there and let your opponent know that you’re hurt, you know? You don’t do that. You keep it all in. You only tell the closest people next to you that are in your camp. We get injured all the time in training, but we don’t tell anybody else. If you have an injury going in, you have to just keep it [to yourself].”

Do you think fighters who credit their loss to an injury are making excuses? Do you think they should have the ability to explain their loss because they trained for weeks before-hand? Share your thoughts in the comment section below!