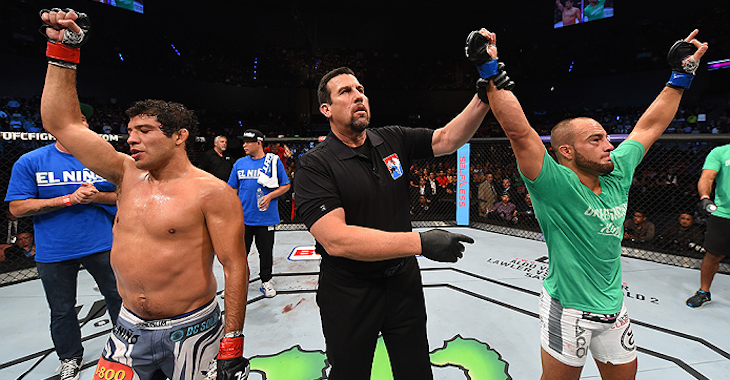 As Gilbert Melendez and Eddie Alvarez stepped into the octagon on Saturday night, fans had high hopes that the lightweights would put on a “Fight of the Year” worthy performance, but they didn’t even earn fight of the night honors. Alvarez and Melendez got off to ta slow start where neither fighter wanted to get within the others’ striking range. Both knew they possessed dangerous power and wanted to save the big shots for later on in the fight.

Judges Derek Cleary, Sal D’Amato, and Chris Lee rewarded Melendez with a much deserved 10-9 opening round. However, the judges started to disagree during the second round when Alvarez started to put up more of a fight. Cleary and D’Amato gave the former Bellator Lightweight Champion the second round while Lee saw it in favor of Melendez.

The judges once again agreed in the final round, giving Alvarez the 10-9 advantage and ultimately the split decision victory. The scorecard was obtained by MMAFighting. Do you agree with the judges? Did Alvarez do enough in the second round to earn the 10-9? Share your thoughts in the comment section below!