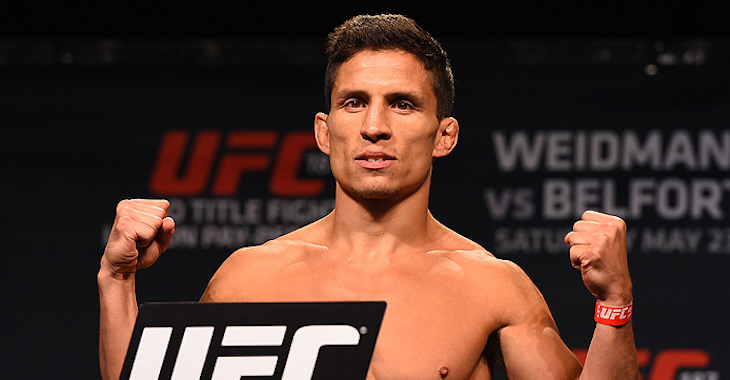 Moraga landed a nice thudding leg kick early. Benavidez tagged Moraga with a big punch that hurt Moraga. Moraga dropped down and Benavidez took top position. Benavidez worked patiently to advance his position, possibly setting up a choke. Moraga managed to get to his feet, but Benavidez stayed on him and shot in again. This time Moraga tried for a guillotine but Joe got out and worked from the top. The two scrambled again. Moraga at one time had the back of Joe but was unable to do anything.

Moraga landed some hard kicks at the start of the second. Benavidez whiffed on a few big right hands. Moraga landed a leg kick that almost took Benavidez off his feet. Then he landed an equally hard kick to the body. The two clinched up on the cage. Benavidez dropped down and got the takedown. Benavidez managed to get to side control, where he landed big elbows. He kept that position until the end of the round.

Moraga really started to turn it up in the third. He moved forward and landed some really nice combos, backing Benavidez up. Then he came in with a flying knee, but Benavidez pushed him back with a kick. Benavidez went forward and got the takedown. Moving into Moraga’s full guard. From there he maintained position until the fight ended.