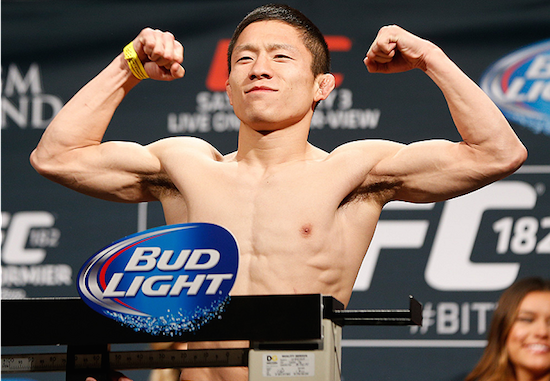 The flyweights made an appearance at UFC 182, when Kyoji Horiguchi went up against Louis Gaudinot. The 24-year-old fighter from Japan, Horiguchi, arrived with an 8 fight win streak while Gaudinot, a member of Team Bisping on TUF 14, looked to make a statement by defeating the highly favorited Horiguchi.

The flyweights came out and put their speed on showcase early. The feeling out process went on for a while. Gaudinot tripped Horiguchi with a well-timed kick. Horiguchi threw a flying knee, but was unsuccessful. Gaudinot landed several kicks and punches, while Horiguchi seemed to have trouble finding his range. Horiguchi looked to implement his loose karate style, while Gaudinot used a more traditional boxing stance.

Horiguchi lands a nice combination to start the second round. During an exchange Gaudinot jumped on a standing arm and head choke, but eventually let it go. Gaudinot continued trying to get in close, while Horiguchi looked to fight from a distance. Again, Horiguchi lands several punches while he has Gaudinot against the cage.

The third looked a lot like the second, as Horiguchi landed kicks and punches using his jumping in karate style. Gaudinot was just unable to close the distance and land anything cleanly.