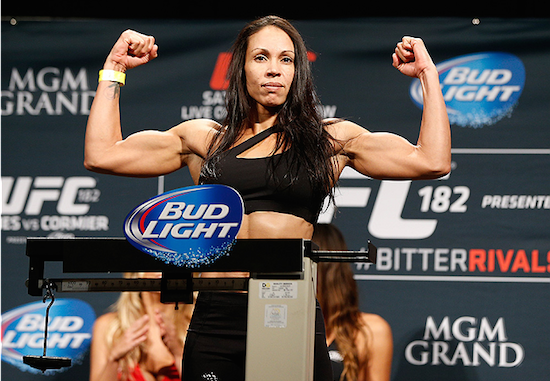 It’s the first fight of the night! Two fighters from the women’s bantamweight division entered the octagon to get things going.

Alexis Dufresne and Marion Reneau, both fighting out of California, looked to pick up the victory at UFC 182. Dufresne, who lost to TUF alum Sarah Moras in her last outing, looked to get back in the winners circle, while Reneau hoped to add to her three fight win streak.

With a combined record of 9-2, and all 9 wins coming via finishes, this fight was tapped to be an exciting one.

Reneau started off strong on her feet, looking to be the more fluid and active fighter. Dufresne’s nose was bloodied early in the first. Reneau kept the pressure up and continued to land punches to Dufresne’s face, who looked sluggish and unable to defend the quick combinations and counters. By the end of the first it was clear who had the advantage on the feet.

Dufresne looked to take the fight to the ground early in the second, but was unable to land the takedown. The stand up clinic from Reneau continued. Dufresne pulled guard at one time but was unable to keep Reneau down.

Unfortunately for Dufresne, the third round looked similar to the first two. She moved around the octagon while Reneau landed punch after punch.