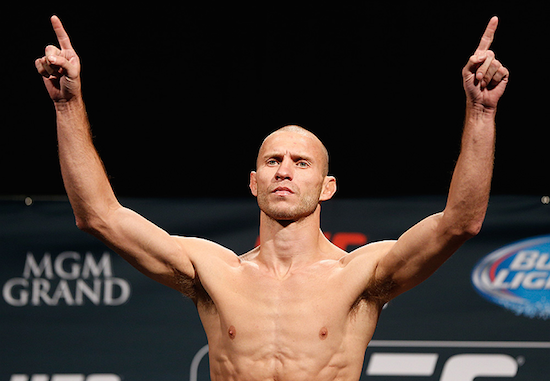 The co-main event went down at UFC 182 between lightweights Donald Cerrone and Myles Jury. ‘Cowboy’ Cerrone had a five fight win streak coming into the fight with Jury, having fought an impressive four times in 2014. His last outing was against Eddie Alvarez in Sept.. Jury, a member of Team Cruz on TUF 15, came in with an undefeated record with fifteen wins. Of those fifteen wins, Jury earned finishes in twelve of them.

Early on in the first, Jury lands a takedown when Cerrone attempts a leg kick. As soon as the fighters hit the mat Cerrone went for a omoplata. Jury stayed calm and looked to free himself, but Cerrone moved to lock it up, forcing Jury to give up his position, giving Cerrone top position in side control. Eventually Cerrone made his way to the back of Jury and locked up a body triangle with his legs. Cerrone stayed patient working the choke with his back on the mat. Jury attempted to stay calm and find a way out, but Cerrone stayed relentless, at one time having it seemingly locked up tight. Jury survived the round.

At the start of the second the crowd began chanting ‘Cowboy’. Jury looked to stick and move, while Cerrone walked him down in his usual fashion. Cerrone found a home for his leg kicks in the second round. Jury landed several hard body kicks. No ground game in the second round, just stand up.

A minute and a half into the third round Jury clinched Cerrone against the cage, but did little damage. Cerrone landed a huge head kick that backed Jury up and brought cheers from the crowd. Jury attempted another takedown against the cage, but Cerrone’s defense was too much. Fighters stood up and Cerrone looked possessed as he continued to come forward. At the end of the fight with 11 seconds left, Cerrone unleashed some pent up aggression when he kicked the legs of Jury while he lay on the ground.