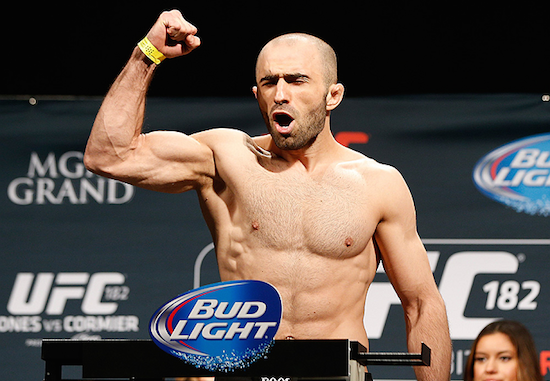 The welterweights took the stage in the second fight of the evening, with Omari Akhmedov vs. Mats Nilsson. Akhmedov is coming off of a loss to Gunnar Nelson, but had won 11 straight before that. Nilsson also lost in his last outing, when he fought Luke Barnatt in March.

Both fighters came out swinging, with Akhmedov swinging for the fences with each punch. The fight briefly went to the ground where Nilsson ate a big punch from the bottom. The Russian fighter continued to throw punches with deadly intent. Nilsson kept his hands up and looked to get in and get out. Eventually Nilsson landed a takedown, but was unable to keep Akhmedov on the ground. When both fighters returned to the feet, it was the Russian fighter who got the takedown. Again, the fight didn’t stay there long. At the end of the first it was Nilsson who again took the fight to the mat.

Nilsson’s technical striking style looked to give him the edge in the second round, while Akhmedov’s power punches started to wear him out. The Russian got the fight to the ground, but failed to do any damage before the fight went back to the feet. Akhmedov got another takedown and kept Nilsson there for most of the round, but Nilsson stayed busy and didn’t take a lot of damage while on the bottom.

Going into the third, the fight was close. Nilsson failed on a takedown attempt, as did Akhmedov. Nilsson’s second attempt proved more successful, as he got Akhmedov to the mat with two minutes left in the fight. The fight went back to the feet, with Nilsson pressing Akhmedov against the cage. The Russian fighter managed to get his own takedown before Nilsson again got to his feet. With around 20 seconds left Nilsson looked to lock in a tight guillotine choke, then transitioned to a darce choke, but time ran out before he could get the finish.