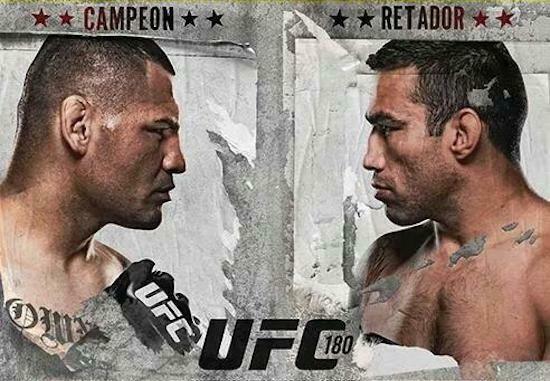 UFC returns to movie theaters nationwide on Sat., Nov. 15 at 10:00 p.m. ET / 7:00 p.m. PT, as Fathom Events and UFC bring UFC 180: VELASQUEZ vs. WERDUM, the UFC’s first-ever event in Mexico, to the big screen. Fans will have a front-row Octagon view of all the action when heavyweight champion Cain Velasquez collides with no.1 contender Fabricio Werdum in the five-round main event on Nov. 15. Broadcast live from the sold-out Arena Ciudad de México in Mexico City, audiences will witness the culmination of 12 weeks of rivalry and competition built up between these two heavyweight coaches on The Ultimate Fighter Latin America, the UFC’s famed reality television series.

Tickets to watch UFC 180: VELASQUEZ vs. WERDUM on the big screen are available at participating theater box offices and at www.FathomEvents.com. The event will be presented in more than 400 select movie theaters around the country through Fathom’s Digital Broadcast Network. For a complete list of theater locations and prices, visit the Fathom Events website (theaters and participants are subject to change).

“UFC 180 is a historic event and fans in theaters nationwide will be treated to the ultimate, front-row Octagon experience as Velasquez and Werdum battle for the title on the big screen,” said Dan Diamond, senior vice president of Fathom Events.

UFC heavyweight champion Cain Velasquez (13-1 in his professional career, fighting out of San Jose, Calif.), an agile and explosive heavyweight with a strong wrestling base, is currently the only heavyweight titleholder of Mexican descent in combat sports around the world. Often referred to as “the baddest man on the planet,” he is widely considered the greatest UFC heavyweight of all time thanks to career wins over former champions Minotauro Nogueira, Brock Lesnar and Junior dos Santos as well as Antonio “Bigfoot” Silva.

No.1 contender Fabricio Werdum (17-5-1, fighting out of Los Angeles, Calif. by way of of Porto Alegre, Brazil) is currently on a four-fight win streak that includes victories over fellow Brazilian jiu-jitsu ace Minotauro Nogueira, Fedor Emelianenko, Roy Nelson, and most recently, Travis Browne. A two-time Brazilian Jiu-Jitsu world champion, he is also known as a technical fighter with heavy hands. Outside of the Octagon, Werdum is seen across Latin America every week hosting the UFC Network™’s weekly magazine show, UFC® Ahora.

Additionally, seventh-ranked Jake Ellenberger (29-8, fighting out of Lake Forrest, Calif. by way of Omaha, Neb.) goes up against no.11 Kelvin Gastelum (10-0, fighting out of Yuma, Ariz.) in a welterweight showdown. Ellenberger, a former Marine and NCAA wrestler, will bring his grit and knockout power to the Octagon against the undefeated winner of the 17th season of The Ultimate Fighter.

Other bouts for UFC 180 include:
· The Ultimate Fighter winner Diego Sanchez (27-7, fighting out of Albuquerque, N.M.) and Joe Lauzon (24-10, fighting out of Bridgewater, Mass.) will collide in a lightweight battle.
· No. 4 ranked, Ricardo Lamas (14-3, fighting out of Chicago, Ill.) will meet Dennis Bermudez (15-3, fighting out of Lindenhurst, N.Y.) in a featherweight showdown that could have title implications.
· Augusto “Dodger” Montano (13-1, fighting out of Mexico City, Mexico), the newest Mexican fighter signed to the organization will make his UFC debut against Chris Heatherly (8-2, 1 NC, fighting out of Cahokia, Ill.), who is unbeaten in four of his last five fights.