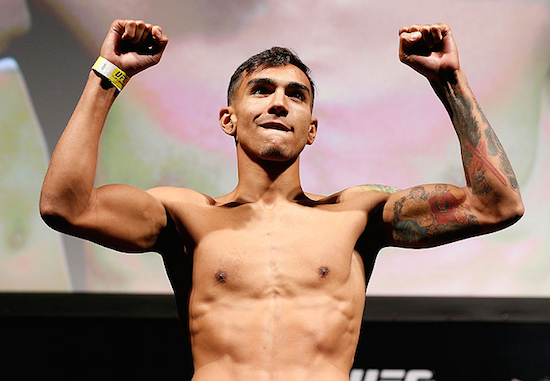 Andre Fili and Felipe Arantes kicked off the Fox Sports 1 preliminary portion of “UFC 179” with a competitive featherweight bout. Fili was looking to prove he deserves to be in the “Top 10” of his division and with his victory tonight he will be on his way.

“Touchy” Fili looked to be in a bad way at the start of the fight when he was taken down and gave up full mount. He took some powerful shots and was cut by a sharp elbow from Arantes, but Fili kept his eyes open for an escape. Fili bucked out and turned the opposite way Arantes was expecting him to and swiftly made it back to his feet. From that point on, Fili seemed to be one step ahead of Arantes.

If they were standing, Fili was dictating the pace of the fight and catching Arantes by changing levels and striking from different angles. Fili was able to take Arantes down with ease but was never able to do anything with the takedowns. He threatened an armbar and omaplata in the third, but Arantes was able to escape.

It was no surprise when Fili was announced the winner.