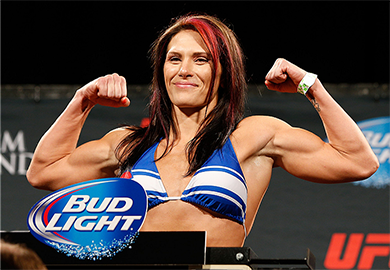 In the opening moments of the first round, Zingano outstruck Nunes and was looking impressive until Nunes turned the tables and took her down. Nunes cracked her with a right hand and proceeded to pummel her. While things were looking bleak for Zingano, she showed great heart by defending intelligently and ultimately escaped danger by making it to the second round.

Zingano walked into the second round as the fresher fighter and she manhandled Nunes for five minutes straight. She threw her to the mat and worked for submissions. Once it seemed like Nunes was going to gain an offensive position by escaping a hold, Zingano would drag her back down to the mat and get back in top control.

The third round proved to be Zingano’s most impressive in the octagon and she not only outstruck Nunes, but she threw her to the ground and landed right in full mount. Zingano threw a strike that cut Nunes open and it was all downhill from there for her. Nunes tried her best to fend off the punishment, but Zingano was determined to finish the fight. Eventually, the referee had seen enough and pulled Zingano off of her prey.