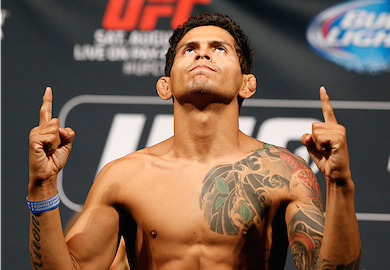 We are two fights into this “lackluster” pay-per-view and it’s already worth the $60 price tag.

Ramsey Nijem and Diego Ferreira followed up an opener with a high-octane lightweight bout that saw somebody nearly go to sleep. Nijem was aggressive in his approach and he benefited from it in the first round, but paid dearly for it in the second.

Nijem charged with an onslaught of strikes that forced Ferreira to backpedal. As Ferreira was backpedaling, he saw that Nijem’s head was up straight and unprotected. Ferreira slipped all of Nijem’s strikes and popped him once on the chin. Nijem’s feet fell out from under him and he was pounced on by an excited Ferreira. Ferreira got a couple extra shots in, but Herb Dean stepped in before Nijem took any unnecessary punishment.

Diego Ferreira def. Ramsey Nijem by way of TKO (Punches) 1:53 of Round 2