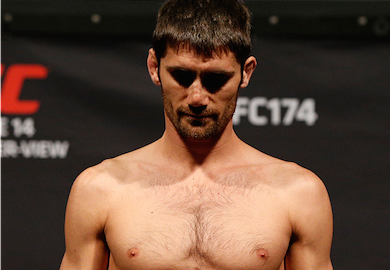 Jason Saggo kicked off “UFC 174” with a dominant first round finish.

Both Jason Saggo and Josh Shockley made their UFC debuts tonight in front of those in attendance at the Rogers Arena on the “UFC Fight Pass” preliminary portion of the card. Saggo took the fight to the ground immediately and established his superiority.

While on the ground, Shockley had great defense and locked in the butterfly hooks from the bottom constantly without fail. However, Saggo was persistent in his attack and eventually flattened Shockley out on his stomach.

Saggo started raining down punches and Shockley was simply turtling up. With ten seconds remaining in the round, the referee warned Shockley to fight back or he would stop the fight. Shockley’s hands remained covering his head and the referee had seen enough.

Jason Saggo def. Josh Shockley by way of TKO (Punches) 4:57 of Round 1